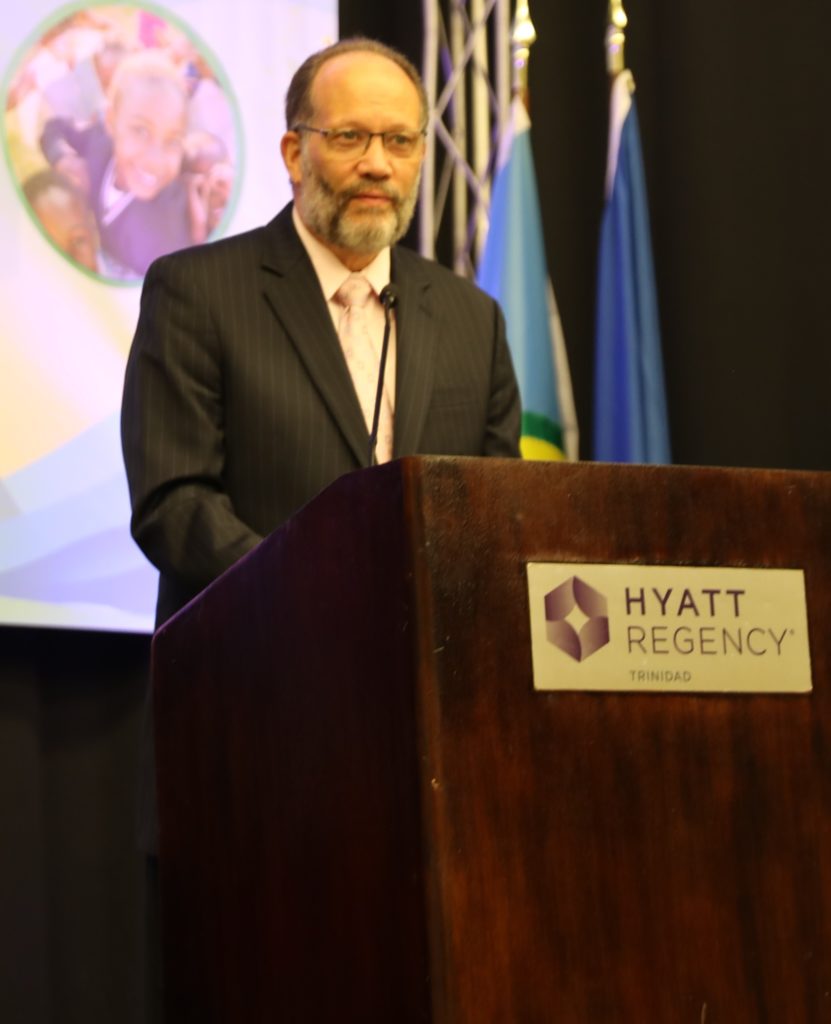 As always it is a pleasure for me to be here in Trinidad and Tobago but even more so this evening given that it is an event dedicated to our Region’s Youth.

I must congratulate Dr. Pemberton and her Planning Committee for having the vision to organise this first Caribbean Congress on Adolescent and Youth Health.

I welcome the representation from across the Caribbean and I am pleased that some CARICOM Youth Ambassadors are participating in this event.

The voices and concerns of our youth must be heard and addressed as we seek to define the world in which we live today and tomorrow. Fora such as these present a suitable opportunity for discourse on issues which have a significant impact on our lives.

The World Health Organization (WHO) defines health as ‘a state of complete physical, mental and social well-being, and not merely the absence of disease or infirmity’.

This definition speaks to a holistic approach which I believe is well captured in the programme for the next three days.

A similar approach has been adopted by the CARICOM Secretariat, over the years, with respect to the development of programmes targeting our youth. These are being conducted through a multi-sectoral institutional framework for national policy, integrated planning, and action, through the CARICOM Youth Development Action Plan (CYDAP). This Plan is a product of the CARICOM Commission on Youth Development (CCYD) in which the youthfully participated.

The Plan focuses on six priority areas with Health and Well-being as an important goal to be achieved. It emphasises “youth access to youth-friendly, gender-sensitive and culturally appropriate health information to maintain their physical, mental, social and emotional well-being”.

A key aspect of achieving and maintaining health and well-being is our lifestyle and the choices we make. The prevalence of lifestyle diseases, such as hypertension and diabetes so concerned our Heads of Government that they held the historic first-ever Summit on Non-Communicable Diseases (NCDs) right here in Port of Spain in 2007. They have held several special sessions subsequently on this topic with the latest in 2017.

It was recognised that NCDs have implications not only for our health; it also has serious social and economic repercussions. Caribbean countries are among the worst affected by NCDs in the Americas. A recent study in one of our Member States showed that the cost of dealing with NCDs is as high as five percent of GDP.

We must all be aware of the four acknowledged risk factors for NCDs. These are unhealthy diet, physical inactivity, tobacco use, and harmful use of alcohol. That awareness must guide us towards behavior that minimises the risks.

Unhealthy diet and physical inactivity, in particular, are areas of significant concern with regard to childhood obesity. In the medium-term, obesity in children represents the greatest threat to the health of future generations.
In many CARICOM Member States, the level of overweight and obesity is more than 30% in both primary and secondary school populations.

Recognising the danger posed by this phenomenon, Heads of Government have endorsed policies geared towards arresting this worrying trend. These include tax measures on beverages and other manufactured food aimed at reducing fats, sugar and salt content. Proposals have also been put forward with respect to front of package labelling.

They have also urged the promotion of physical exercise in school-age children and greater emphasis on public education programmes encouraging healthy lifestyles.

A 2013 Report on Student Drug Use in 13 Caribbean Countries, released by the Inter-American Drug Abuse Control Commission (CICAD), showed a marked increase in the overall average prevalence of drug use when compared to 2010.

The Caribbean Community has, for several years, been addressing the harmful use of drugs within the context of the Regional Drug Demand Reduction Strategy.

Among the notable initiatives undertaken which have either involved youth themselves or have targeted youth as a vulnerable group are:

 adolescent treatment and prevention training to build the capacity of drug demand reduction practitioners working with adolescents and youth; and

 capacity-building among youth in the use of edutainment as a means of communicating information on drug use prevention and treatment.

Another health issue that is gaining increasing attention among our young people is that of mental health. Last year in Jamaica at my annual interaction with the youth of the region this issue was specifically put forward by the youth.

One of our young health professionals presented a paper at that forum which pointed to a WHO/PAHO (2016) report that indicated that 4% of the regional population were treated for mental illnesses across the region in 2015. The most prevalent mental disorders were schizophrenia and depression with the highest diagnosis rate in the 18-30 age category.

She identified suicide as a possible outcome of mental illness with a mortality rate of 7.3 per 100,000 in the Region.

She referred to the pressure placed on youths to succeed in examinations, the phenomenon of bullying and peer pressure which all have an adverse effect on the mental health of adolescents and youth.

This issue has been, of late, receiving a lot of attention through sensitization and realisation of the seriousness of the matter. Last Thursday, World Mental Health Day, was used by our Member States to highlight initiatives being taken to combat the problem with emphasis on the youth.

One of the multiple risk factors for mental illness is posed by the traumatic psychological effects of natural disasters. As climate change continues to increase the intensity and frequency of these disasters in our Region, the toll on the mental health of our people is also a matter of real concern.

In the aftermath of the devastating storms, such as we saw in 2017 with Hurricanes Irma and Maria, and this year with Hurricane Dorian, serious health risks will arise, both physical and mental. Vulnerable groups bear the brunt of much of the damage, destruction and despair. PAHO has been very active working with our Member States to address the challenges. The Caribbean Development Bank (CDB) is funding a project since 2018 on mitigating post-disaster mental challenges in CARICOM Member States.

This is one of the issues that demands that we increase our drive to create greater resilience to withstand the economic, physical and social effects of the climate phenomenon. You the youth must become involved, in helping to build our resilience as a Region.

CARICOM is also committed to improving the sexual and reproductive health of adolescents and youth.

This is clearly articulated in the Integrated Strategic Framework for the Reduction of Adolescent Pregnancy in the Caribbean, produced by CARICOM and the United Nations Population Fund (UNFPA). There is also the Regional Plan of Action for Women, Children and Adolescent Health, which was approved by CARICOM Ministers of Health in September 2018 and the Caribbean Woman, Caribbean Child Initiative.

The work done by the Pan Caribbean Partnership against HIV and AIDS (PANCAP) also addresses the sexual and reproductive health needs of adolescents and youth.

I have taken note of the expectation that this Congress will strive to arrive at core principles to address the health needs of adolescents and youth in the Caribbean. I therefore look forward to receiving your recommendations.

You can be assured of my commitment to continue engaging with our adolescents and youth to address the issues related to health and well-being and to ensure your continued valuable contribution to the achievement of a viable and prosperous Caribbean Community.