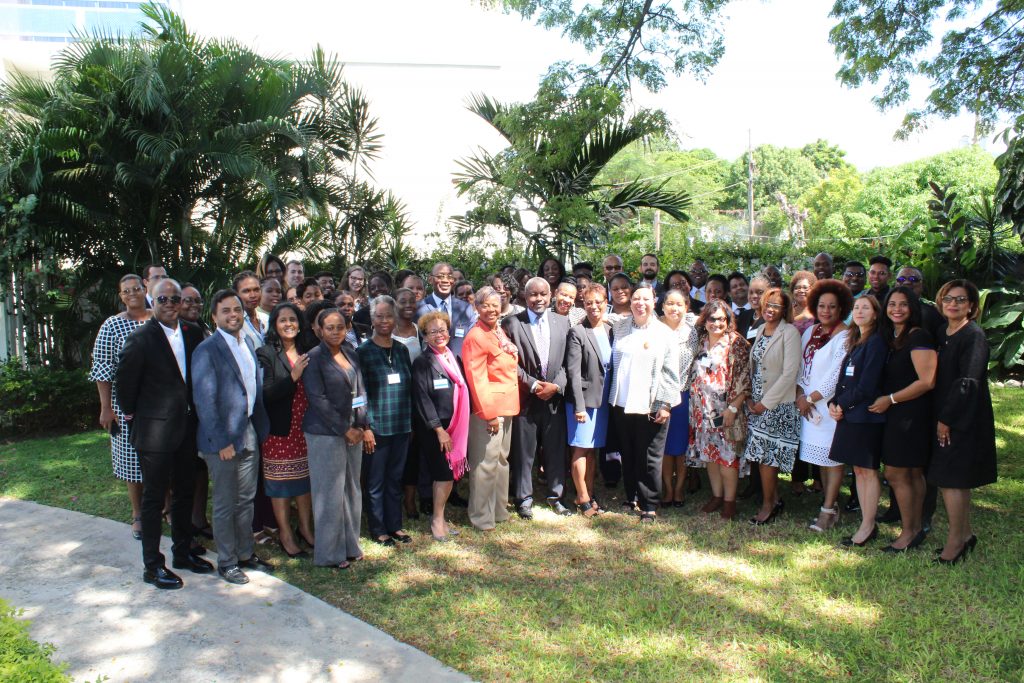 Regional Meeting on Ending AIDS in the Caribbean: Expanding Equitable, Effective, Innovative and Sustainable HIV Responses towards the 2020 Fast Track Targets on the way to Elimination held in Kingston, Jamaica – 1 November 2018

Event: Regional Meeting on Ending AIDS in the Caribbean: Expanding Equitable, Effective, Innovative and Sustainable HIV Responses towards the 2020 Fast Track Targets on the way to Elimination

Thursday, 1 November 2018 (PANCAP Coordinating Unit, CARICOM Secretariat): The Pan-Caribbean Partnership against HIV and AIDS (PANCAP) and the Pan American Health Organization (PAHO) hosted the Regional meeting on Ending AIDS in the Caribbean: expanding equitable, effective, innovative and sustainable HIV responses towards the 2020 Fast Track targets on the way to elimination in Kingston, Jamaica on 1 and 2 November 2018.

The purpose of the meeting is to sensitize Caribbean stakeholders on policy approaches that are required to reduce health inequalities.  The meeting encompasses the creation of a set of concrete actions to implement the Call To Action that emanated from the Third Latin America and Caribbean Forum on HIV and Sustainability (10 November 2017) for inclusion in the post 2018  Caribbean Regional Strategic Framework on HIV and AIDS (CRSF). These actions will support expanding equitable access to health and social services while strengthening health system responses to HIV and its sustainability.

She stated, “We have been working assiduously to promote the legal empowerment of key populations (KPs) to improve access to health and justice and reduce human rights violations with a view to promoting an enabling environment as we join fast-track efforts”.

Ms. Sutherland underscored that throughout the Caribbean, Community-based organizations (CBOs) and the communities they work in are key players in the delivery of health services, as they have unique advantages in advocacy, demand creation and linkage of communities to services, building an understanding of what treatment, prevention, care and support are, and keeping governments, and donors accountable. However, they often deliver services without stable and predictable funding or systemic linkages to formal public health facilities.

She further stated that building effective responses to priority health challenges with Key Populations, particularly in the face of the 90-90-90 commitments is a key priority for all civil society groups that work in the trenches contributing to the HIV response in the region.

She emphasized that despite the interventions, stigma and discrimination in health services is widespread, limiting key populations’ access to services. “Weak justice systems and a limited culture of rights litigation result in impunity. More generally, the application of laws and policies allow the use of arbitrary interpretations of laws to affect operational policies, which in turn limit access to services”, stated Ms. Sutherland.

Dr. James Guwani, Team Leader and Senior Advisor, Fast Track, The Joint United Nations Programme on HIV/AIDS (UNAIDS) Caribbean Sub-Regional Office underscored that the Regional Meeting on Ending AIDS falls at the halfway point to 2020.  “That’s a deadline the global community agreed upon for meeting targets that will set us on a course to end the AIDS epidemic”, stated Dr. Guwani.  He congratulated PANCAP Director, Dereck Springer, as well as PAHO for their leadership in sharing the vision of a region without AIDS. He noted that their commitment to exploring the scientific as well as social dimensions of the challenge is invaluable, particularly now that the 2020 Fast Track target is approaching.

He further stated that through the 2016 Political Declaration on ending AIDS, the community of nations has agreed to adopt a Fast-Track strategy that involves increasing prevention, testing, and treatment services while working to eliminate stigma and discrimination. He emphasized that central to this goal are the 90-90-90 Treatment Targets.

“Here in the Caribbean, the AIDS response is at a precarious point”, stated Dr. Guwani, “There has been partial success in saving lives and stopping new HIV infections, but the pace of progress is not matching the global ambition.  According to new data published earlier this year in the UNAIDS 2018 Global AIDS Update, there were an estimated 310,000 People Living with HIV (PLHIV) in the Caribbean at the end of 2017”.

He informed that 73% of PLHIV in the region were aware of their status while 79% of diagnosed people were on treatment. Dr. Guwani expressed his concern that the region lags behind the world in terms of viral suppression rates. “Our 70% in 2017 compares to a global average of 81%” he emphasized.

He urged that the Caribbean must increase its use of proven strategies such as community-led services for early diagnosis, enrolment in treatment, retention in care and treatment adherence. Dr. Guwani advocated that combination prevention must be a priority, with more countries making use of the full arsenal at our disposal to reduce new infections including biomedical, behavioral and structural interventions.

“Make no mistake: stigma and discrimination and restrictive laws and policies continue to be the biggest obstacle to ending AIDS in the Caribbean, particularly for young people and members of key population communities,” stated Dr. Guwani, “And so the Justice for All meeting hosted here in Kingston over the last couple of days presented a critical opportunity for further collaboration between governments, civil society and the faith community towards building an enabling environment”.

He emphasized that addressing all these issues requires financial investments and alluded to the fact that the Caribbean AIDS response is experiencing a funding crisis.  Dr. Guwani shared that between 2006 and 2017 international resources in the region decreased by 16%.  In 2017, just under half of the money needed to finance the achievement of the Fast Track programme in the region was not available.

He advocated that even as stakeholders negotiate with international partners, a message must be sent to governments within the region that there must be full funding for the AIDS response.

In her keynote address, Dr. Bernadette Theodore-Gandi, PAHO/WHO Representative to Jamaica, Bermuda and The Cayman Islands stated that she was optimistic that HIV and AIDS will not be epidemics much longer, and at that time, the region will be proud to be part of initiatives like the Regional Meeting, being supportive players in the response.

She highlighted that the UNAIDS Global AIDS Monitoring database shows that the Caribbean region has seen a 18% reduction in new infections of HIV and 23% reduction in the number of AIDS-related deaths this year.

“Once, thought to be too ambitious, the Caribbean region now leads the world in the elimination of Mother-to-Child transmission of HIV and syphilis”, stated Dr. Theodore-Gandi, “Currently, 7 out of the 11 countries were validated globally for EMTCT, and 7 out of the 8 countries achieving dual elimination of HIV and syphilis are from the Caribbean. These are inspiring steps toward ending the epidemic”.

She advocated that winning the fight against AIDS, however, requires an appreciation of the factors outside of health that also drive the epidemic.  She stated that “the Sustainable Development Goal 3, ‘good health and well-being’ aims to ‘ensure healthy lives and promote well-being for all ages. It includes the target 3.3, which specifically states that by 2030, [we will] end the epidemics of AIDS, tuberculosis, malaria…’ But meeting the targets of the other 17 SDGs will also contribute significantly to ending AIDS, as they too provide guidance that supports health and well-being in a holistic way”.

Dr. Theodore-Gandi highlighted that by ending poverty and hunger, SDGs 1 and 2, the region will be supporting PLHIV and their families with the capacity to better manage their lives and adhere to treatment. She emphasized that by supporting high-quality education for all, SDG 4, the region will be supporting educational models where boys and girls are empowered with the information necessary to prevent diseases and STIs like HIV, thereby improving health and health equity.

“And of course, SDG 5 – gender equality; the fight against AIDS will never be won in this region if we fail to address gender inequities, including violence against women and girls,” stated Dr. Theodore-Gandi.

She further stated that if the region is to reduce inequalities, SDG 10, there must be an agreement that the principles of Universal Health also include PLHIV, men who have sex with men, women, and girls, sex workers, persons of transgender experience, persons incarcerated, people living with disabilities and all populations most-at-risk. She advocated that if the region is to address the underlying factors that leave people vulnerable to HIV infection, no person or group should be left behind.

Dr. Theodore-Gandi underscored that ending AIDS in the Caribbean will require addressing these gaps, as well as the challenges that continue to persist in accessing essential HIV services. While some 73% of PLHIV were aware of their HIV status at the end of 2017, only 57% were accessing antiretroviral treatment and 40% were virally suppressed. Men who have sex with men, sex workers, transgender persons, and their sexual partners, represent approximately 70% of new cases. In addition, 1 in every 3 new cases occurs in young people 15 to 24 years old.

“Let us be responsive to this evidence before us. The data suggests that more concerted and collective efforts are needed in the treatment and viral suppression areas of our HIV cascade”, stated Dr. Theodore-Gandi “Equitable access, new and innovative approaches, high-impact, evidence-based interventions and appropriate use of technologies, will help contribute to improved efficiency and sustainability in these areas”.

She advocated that an effective HIV response is also a human rights-based response and that to move the region’s HIV response from a phase of plateau to a place of sustained high impact, some countries must accelerate the removal of laws which criminalize PLHIV and key populations. “I encourage all stakeholders of political influence to recognize their role in creating an enabling policy and legal environment which support an effective response to HIV prevention, care and treatment services for all who need them,” stated Dr. Theodore-Gandi.

She warned that the evidence is conclusive that failing to do this sends PLHIV and key communities into hiding and farther away from the services they need to keep them alive.  She encouraged the participants to build on their existing work and the rich experiences of all stakeholders, taking into strong account the voices of PLHIV, key communities and civil society working in the trenches.

“Let us be ‘realistically-strategic,’ yet ambitious with our ways forward. Let us identify concrete and measurable actions.  Let our decisions foster increased access to health and social services. Let them inspire strengthened engagement of PLHIV, key populations, as well as inter-ministerial involvement in the response. Let us also prioritize the strengthening of integrated and sustainable health systems, which are better equipped to respond to HIV and related health issues across our Caribbean countries and territories, including small island states,” stated Dr. Theodore-Gandi.

She highlighted that with a recognition of the SDGs and a respect for human rights and being guided by countries’ data, she has no doubt that at the end of the Regional Meeting, the Caribbean would have been several steps closer to a rapid expansion of an equitable, effective, innovative and sustainable HIV response toward the 2020 Fast Track Targets and closer to ending AIDS by 2030 and for generations to come.

Ministers of government, parliamentarians, legislators, permanent secretaries, chief medical officers, and national AIDS programme managers from over 16 countries as well as regional and national representatives from civil society, and development partners are participating in the Regional Meeting.  The forum will conclude on 2 November 2018 with strategic steps to support expanding equal access to health and social services and strengthening health system responses to HIV and its sustainability.