Regional Meeting on Ending AIDS in the Caribbean: Expanding Equitable, Effective, Innovative and Sustainable HIV Responses towards the 2020 Fast Track Targets on the way to Elimination

Countries in the Caribbean have committed to the UNAIDS Fast-Track targets, integrated in the new WHO Global Health Sector Strategy for HIV prevention and control (2016-2021) and PAHO Regional Plan of Action on HIV and sexually transmitted infections (2016-2021), as milestones towards the longer-term goal of ending AIDS and STIs as public health problems in 2030. To achieve these targets, namely the 90-90-90, HIV prevention and zero discrimination targets, countries will require an accelerated, more focused and effective HIV response, equitable access to services, innovative approaches and high-impact interventions and technologies, which will contribute to improved efficiency and sustainability.

The Caribbean Regional Strategic Framework for HIV which is currently being developed is expected to bring together the various global and regional commitments which the Members States have approved. This plan will not only seek to address HIV but will also include the co-morbidities such as STIs, TB, mental health, NCDs and represents a commitment to inclusive and harmonized multi-sectoral actions in an effort to achieve universal access and coverage to comprehensive, high-quality services, while meeting the commitments of Member States.

Approximately 310 000 people were living with HIV in the Caribbean at the end of 2017. Since 2010 an 18% reduction in new HIV infections and 23% reduction in the number of AIDS-related deaths has been observed in the Caribbean as a whole (UNAIDS 2018 Global AIDS Monitoring), nevertheless, although encouraging, these downward trends are still insufficient to ensure expected targets will be met and HIV incidence is not subsiding in certain key populations (e.g. men who have sex with men; sex workers; transgender persons) and their sexual  partners that still represent approximately 70% of new cases. In addition, 1 in every 3 new cases occurs in young people (15 to 24 years old). The Caribbean is leading globally with the elimination of the Mother-to-Child transmission of HIV and syphilis. However, critically analysis of the 2017 data has revealed that over the past years, there has been a significant decrease in the estimated coverage of both HIV testing and ART among pregnant women. HIV testing decreased from 92% in 2014 to 73% in 2017. Similarly, the ART coverage of pregnant women has also decreased from 89% in 2013 to 75% in 2017. In general, the EMTCT rate of 13% for HIV has remained unchanged since 2014. Congenital syphilis incidence rate remains below the elimination target of 0.5 cases per 1,000 live birth.

At the same time, gaps persist in access to essential HIV services and, while some 73% [53–95%] of people living with HIV were aware of their HIV status at the end of 2017, only 57% [42–80%] were accessing antiretroviral treatment and 40% [30–56%] were virally suppressed. Furthermore, in some countries, the support of donors like the Global Fund and PEPFAR continues to be fundamental, but in many countries, external aid is expected to decline due to economic growth that led countries to exceed eligibility thresholds. “Graduating” countries face transitional periods that require increased efforts to dedicate domestic resources to guarantee the continuation of HIV/AIDS programs.

In November 2017 in Port-au-Prince, Haiti, key regional stakeholders met for the Third Latin American and Caribbean (LAC) Forum on HIV. The main goal of this meeting was to facilitate a space for discussion and to generate consensus on regional priorities and strategies to support the rapid expansion of a sustainable, efficient, effective, integrated and intersectoral HIV response for the achievement of the Fast Track targets in Latin America and the Caribbean. A new Call to Action was endorsed including actions that should be prioritized to achieve the goal of sustainability of the HIV response based on the principles of Human Rights and Universal Health, and for adopting the core values of the right to the enjoyment of the highest attainable standard of health, equity, and solidarity

This regional consultation meeting aims at unpacking these recommendations with Caribbean stakeholders, including both HIV program officers, as well as senior government officials, policy makers, representatives from civil society and key regional partners, discussing and identifying concrete actions to support increased access to health and social services, with special emphasis on PLHIV and members of key populations groups, as well as the sustainability of the health system response to HIV in Caribbean countries.

Regional Meeting on Ending AIDS in the Caribbean: Expanding Equitable, Effective, Innovative and Sustainable HIV Responses towards the 2020 Fast Track Targets on the way to Elimination held in Kingston, Jamaica – 1 November 2018 Press Release

Regional meeting on Ending AIDS in the Caribbean: expanding equitable, effective, innovative and sustainable HIV responses towards the 2020 Fast Track targets on the way to elimination - Kingston, Jamaica - 1 and 2 November 2018 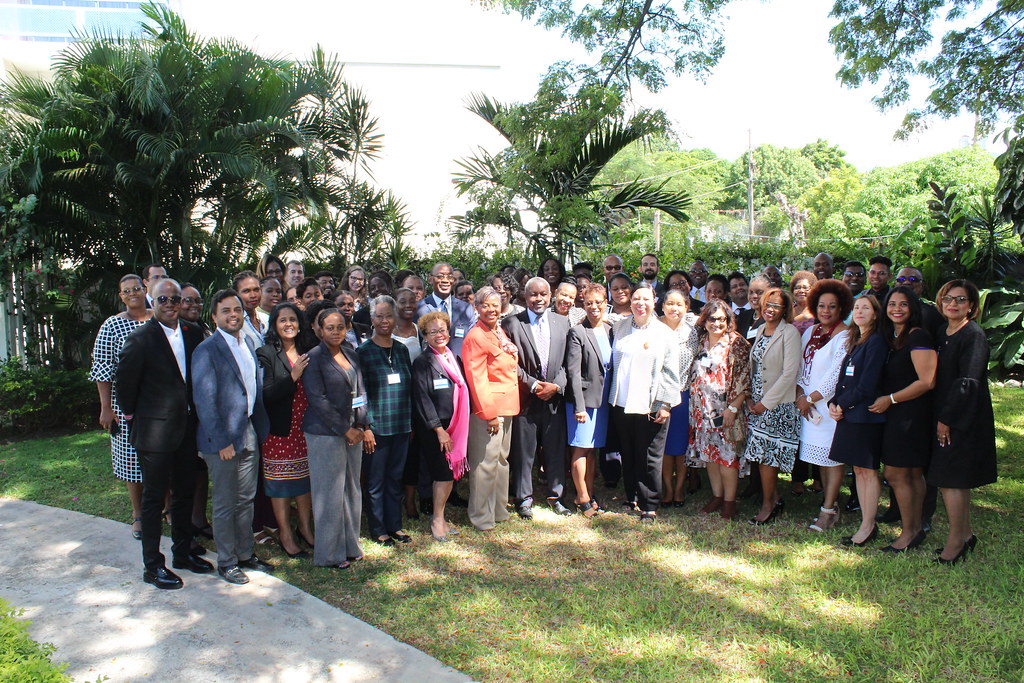