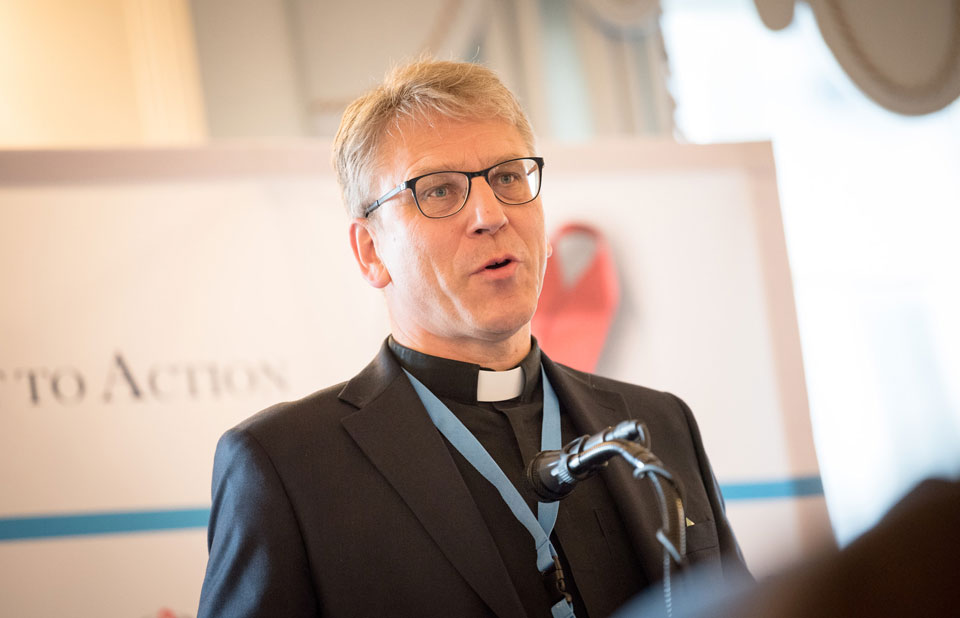 Faith-based organizations have played a critical role in responding to HIV since the start of the epidemic more than 35 years ago. Their position of trust at the heart of communities has allowed them to provide services and support that extends beyond the reach of many public-sector health systems.

Faith-based organizations are now at the heart of a special mission, issuing a call to action to ensure that infants, children and young people have access to HIV prevention, testing and treatment.

There are good reasons for the call to action: UNAIDS’ latest report, Ending AIDS: progress towards the 90–90–90 targets, shows that in 2016 there were 2.1 million children aged 0–14 years living with HIV and less than half had access to treatment. Without treatment, around one-third of children living with HIV will die by their first birthday and half by their second.

One of the main reasons that children and young people are not accessing treatment is the low HIV detection rates. In 2016, only 43% of babies born to mothers living with HIV were tested for HIV within the first two months of life. Without knowing whether a child has HIV it is impossible to access treatment.

The UNAIDS report also shows that 2.1 million adolescents aged 10–19 years were living with HIV, a 30% increase from 2005, highlighting the urgent need to ensure that adolescents are freely able to access age-appropriate HIV services, including HIV prevention, treatment and care.

Concerted global efforts are being made to address these disparities. In 2016, United Nations Member States committed to putting special emphasis on providing 1.6 million children with access to antiretroviral therapy by 2018 and ensuring that children, adolescents and adults living with HIV know their status and are immediately offered and sustained on affordable and accessible quality treatment.

These ambitious targets, the Super-Fast-Track approach for children, have been incorporated into the Start Free, Stay Free, AIDS Free framework to galvanize action, led by UNAIDS, the United States President’s Emergency Plan for AIDS Relief (PEPFAR) and partners, which seeks to put the world firmly on a path to ending AIDS among children.

The engagement of the faith community is paramount to achieving these goals and in 2016 faith groups held a series of consultations at the Vatican on how to accelerate action. To further strengthen relationships and forge new partnerships, the World Council of Churches–Ecumenical Advocacy Alliance, in collaboration with UNAIDS, PEPFAR and the United Nations Interagency Task Force on Religion and Development, hosted an interfaith prayer breakfast on 13 September on the sidelines of the 72nd session of the United Nations General Assembly in New York, United States of America.

Faith leaders from a multitude of religions came together at the event, all of whom agreed to support a coordinated faith-based effort in responding to HIV. Different calls to action and declarations were formulated calling for strong follow-up actions, recommendations and commitments to ensure a Fast-Track faith-based response to make HIV testing and treatment available for children and adolescents by 2020.

“WE ARE LITERALLY TALKING ABOUT SURVIVAL. THE SURVIVAL OF CHILDREN WHICH DEPENDS ON EFFECTIVE ACTION BY THE NATIONS OF THE WORLD. WHAT MORE NOBLE PURPOSE COULD UNITED NATIONS BE UNITED AROUND. WE ARE EACH CALLED TO LOOK TO OUR VARIOUS FAITHS, AS THE FOUNDATION FOR OUR RESPONSE TO HIV.”

“FAITH-BASED ORGANIZATIONS HAVE BEEN VITAL TO THE GLOBAL AIDS RESPONSE SINCE THE VERY BEGINNING, SAVING AND IMPROVING MILLIONS OF LIVES. AS WE FAST-TRACK TOWARD ACHIEVING EPIDEMIC CONTROL, THE POWERFUL LEADERSHIP AND UNIQUE REACH OF THE FAITH COMMUNITY IS AS IMPORTANT AS EVER.”

“CHILDREN SHOULD BE AT THE CENTRE OF OUR ATTENTION AND WORK. THEY ARE THE MOST VULNERABLE AND AT THE SAME TIME THE LEAST RESPONSIBLE FOR THIS SITUATION. SO LET’S DO THIS TOGETHER – WE CAN. MAY GOD GIVE US THE COURAGE.”

OUR PARTNERSHIP IS KEY. FAITH-BASED ORGANIZATIONS ARE NOT JUST A PART OF THE RESPONSE THEY ARE AT THE CORE OF IT. IT IS CLEAR THAT WE NEED TO STEP UP ACTION TO ACHIEVE THE PAEDIATRIC TARGETS.

“OUR COMPASSION MUST BE STIRRED FOR CHILDREN AFFECTED BY HIV, ESPECIALLY CHILDREN RAISING OTHER CHILDREN BECAUSE THEIR PARENTS DIED OF AIDS. WE NEED TO SUPPORT THE QUIET HEROES WHOSE NAMES ARE NEVER MENTIONED AND YET THEY ARE THE ONES CARING FOR THOSE CHILDREN. CAN YOU IMAGINE THE DAY WHEN THE CHAPTER ON AIDS IS CLOSED AND A NEW CHAPTER IS WRITTEN?”