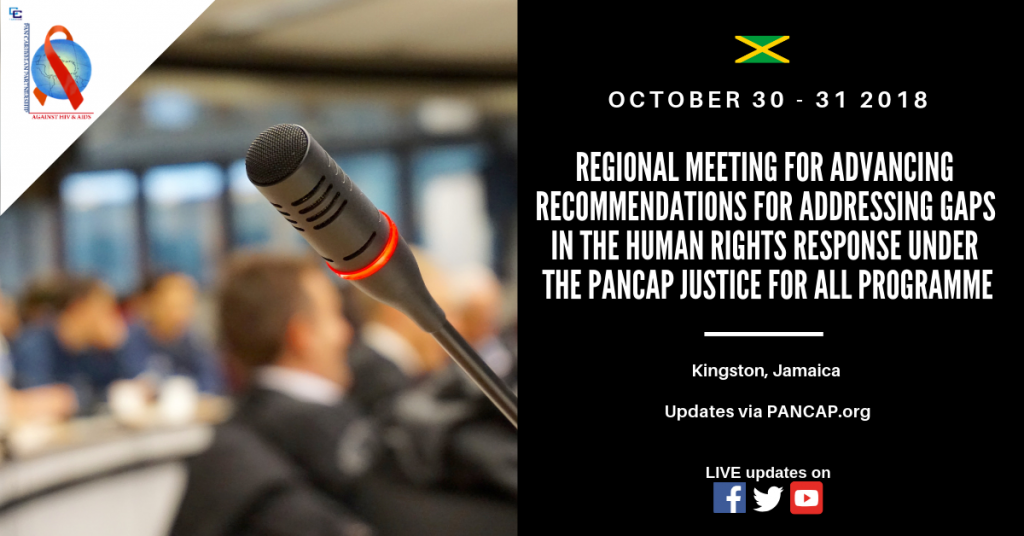 The Pan Caribbean Partnership against HIV and AIDS (PANCAP), with funding from the Tenth European Development Fund (EDF), will facilitate a two-day Regional Meeting to disseminate the findings of an assessment of the human rights situation in the Caribbean and to advance the recommendations on human rights gaps within the context of the Justice for All Programme. The meeting will be held in Kingston, Jamaica on 30 and 31 October 2018.

The objectives of the meeting will include validation of the findings outlined in the Position Paper on the Human Rights Situation in the Caribbean, acquiring consensus on the key priorities at the regional level,  identifying the focal points and stakeholders’ commitments in addressing the gaps outlined and identifying strategies to address gaps and achieve desired results.

The HIV epidemic in the Caribbean has been stable over the last decade. Approximately 310 000 [260 000–420 000] people were living with HIV in the Caribbean at the end of 2017. (UNAIDS 2018 Global AIDS Monitoring). Some 73% [53–95%] were aware of their HIV status at the end of 2017; 57% [42–80%] were accessing antiretroviral treatment; and 40% [30–56%] were virally suppressed. Since 2001, the Pan Caribbean Partnership against HIV and AIDS (PANCAP), established by a Declaration of CARICOM Heads of Government, has been leading the response to HIV in the region. PANCAP, comprising Governments, civil society and regional and development partners, provides a structured and unified approach to the Caribbean’s response to the HIV epidemic, coordinates the response through the Caribbean Regional Strategic Framework on HIV and AIDS (CRSF) to maximise efficient use of resources and increase impact, mobilises resources and build capacity of partners.

Human rights promotion and protection are central to any response to HIV and AIDS. PANCAP has been collaborating with partners to implement a programme of activities under the theme, “Justice for All”. The aim of the programme is to promote activities consistent with the United Nations (UN) Universal Declaration of Human Rights to which all countries are committed. More specifically, it is intended to achieve one of the goals of the UN High-Level Meeting (HLM) Political Declaration (2011) to reduce stigma and eliminate discrimination against people living with HIV by 2015 and to uphold the human rights and dignity of all. The Justice for All Project builds and advances earlier initiatives, including the CARICOM/PANCAP/Department for International Development (DFID) Champions for Change Initiative and the Caribbean Regional Dialogue of the Global Commission on HIV and the Law. It was also modified by the recommendations from the 2014 and 2016 UN High-level Meetings Political Declarations which reinforced that reducing AIDS-related stigma and discrimination is critical to fast-tracking the end of AIDS. New biomedical and behaviour research has also produced concrete possibilities and barriers to achieving the end of AIDS. On the one hand, there are the UNAIDS 90-90-90 targets indicating that AIDS can be ended if 90%of PLHIV Know their status, 90% of those who know their status are treated, and 90% of those on treatment are virally suppressed. On the other hand, most recent reports show that AIDS is far from over with possible reversals of gains due to complacency and failure to implement policies and programmes aimed at protecting human rights. These developments have been taken into account in updating the Justice for All Roadmap

PANCAP has been provided with funding under CARIFORUM’s 10th EDF Wider Caribbean Cooperation – Regional Technical Cooperation Facility to continue its work in combating the ills of HIV. Specifically, the funding is targeted towards strengthening coordination on Human Rights issues through the previously HIV and AIDS Thematic Task Force (TTF). The existing PANCAP Policy and Strategy Working Group on Stigma and Discrimination (PSWG) will undertake the role of the HIV and AIDS TTF and will provide oversight for the implementation of the PANCAP Justice for All and Human Rights Roadmap. The overall goal of the PSWG is to advance Human Rights in the context of HIV and support the elimination of stigma and discrimination in the Caribbean. Included in the sub-activities are: the development a position paper on human rights situation in the Caribbean; convening meetings of PSWG, convening a series of national-level trainings for faith leaders and parliamentarians in six countries and a regional meeting that will bring together at stakeholders from all sectors to discuss stigma and discrimination in the context of human rights.

Through the 10th EDF funding, PANCAP will build upon the work already initiated with parliamentarians and faith leaders under the Caribbean Regional Strategic Framework on HIV and AIDS 2014 – 2018 and Global Fund support to ensure that these groups are fully aware of our human rights agenda and develop an understanding of the broad range of issues and populations it seeks to address. Resources are being used to facilitate the advocacy engagement of the public health community with the political policymaking community and faith community in order to achieve better outcomes for key populations.

A Consultant was contracted to develop a Position Paper on the Human Rights situation in the region. This assignment is intended to provide an update on the status, developments, gaps and opportunities; and to identify bottlenecks and major issues related to HIV-related stigma and discrimination and the broader issues of human rights affecting key population groups.