The Pan Caribbean Partnership against HIV and AIDS (PANCAP), the mechanism that provides a structured and unified approach to the Caribbean’s response to the HIV epidemic, upon the initiative and request from the Office of the Deputy Secretary-General, CARICOM Secretariat, will facilitate an awareness activity on HIV and AIDS titled the ‘HIV Edutainment Hangout’. The special initiative will focus on the children of CARICOM employees, ages 10 – 19 and will be held on Wednesday, August 9, 2017 at the CARICOM Secretariat, Georgetown, Guyana.

The event will be hosted by the Office of the Deputy Secretary-General in collaboration with the PANCAP Coordinating Unit, CARICOM Secretariat. The first of its kind, the activity is meant to reinforce the message from PANCAP to increase HIV and AIDS education among youth in the region.

Role-play, drama and creative writing will be utilised to engage participants in scenarios, which will seek to build their capacity to recognise social situations, which may put them at risk, as well as the ability to recognise stigma and discrimination and ways in which HIV transmission can be prevented. 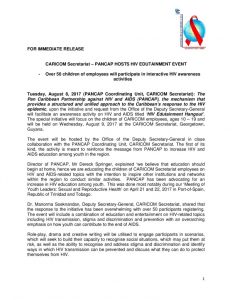