What a Farewell from the PANCAP Coordinating Unit! 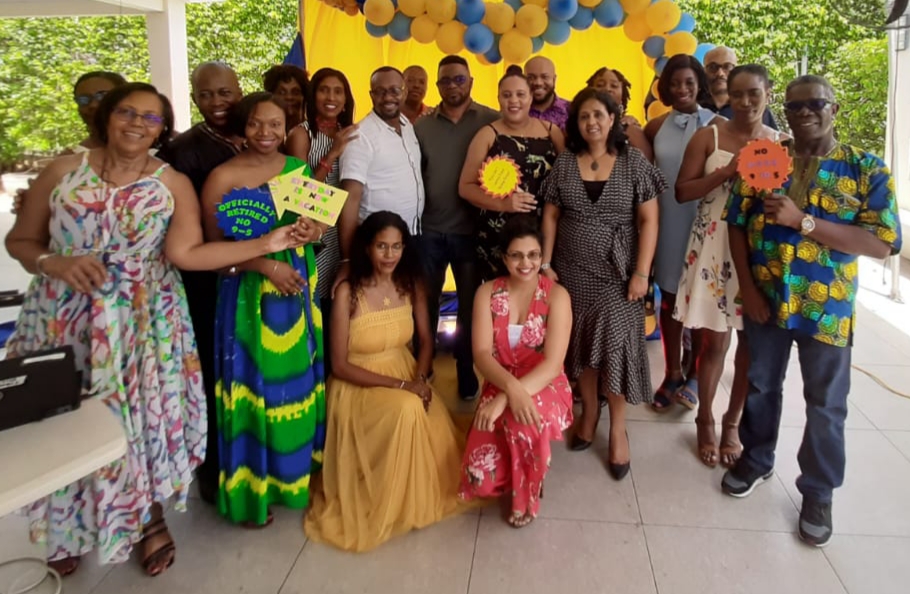 It was an intimate gathering on 24 February 2020, as staff of the PANCAP Coordinating Unit and a few members of the wider CARICOM Secretariat celebrated soon to be former Director, Mr Dereck Anthony Springer, at Parc Rayne, East Bank Demerara, Guyana.

The tributes were many.  In speeches and statements that were candid reflections of the man, his measure and message.  In songs and serenades by his staff led by Nickosha DeNobrega and later the great Mariah Carey, the lyrics so profound and beautiful that even the discordant chords, the contribution of the gathering, were not a distraction.

Tributes came from all levels of staff of the PCU and from the wider Secretariat with whom he has worked closely. They included the CARICOM Deputy Secretary-General, Dr Manorma Soeknandan and Dr Douglas Slater, Assistant Secretary-General.

They came also from those he continues to work with in a commitment to turn back the tide of the epidemic and to ensure it does not stay on shore. Among them, Dr Edward Greene, former Assistant Secretary-General for Human and Social Development, CARICOM Secretariat and UN Secretary-General Special Envoy for HIV and AIDS in the Caribbean.

All contributions highlighted who Dereck Springer was and is, in both professional and personal capacities They all proclaimed him an exemplary leader who led by example; a dedicated, disciplined and decisive leader; and “a man of the time, in the time and for the time” a fitting title of a booklet with glowing tributes from a wide cross-section of PANCAP partners that was presented to him.

A stunning portrait in the true likeness of Dereck was presented to him and it was fitting that the artist, Compton Babb, was a special guest, and witnessed the adulation for his work from Dereck and all those in attendance. It was indeed a wow! factor.   It preceded Dereck’s eloquently comprehensive “thank you” to every member of his staff and all those present.

This memorable event basked in an atmosphere consumed with appreciation, camaraderie, jolly banter, great cuisine and a joie de vivre. It was tinged with a bit of raw emotion, the reality that after all, this was a farewell. It was a beautiful morning. The photos attempt to tell part of the story; the whole story, forever hidden in the hearts of all who were a part.