CRN+ Networks benefit from learning exchanges
Region prepares to host 2nd Caribbean Congress on Adolescent and Youth Health
Vulnerable Populations to benefit from work of Caribbean Observatory on Sexual and Reproductive Health and Rights
Belize’s Global Fund Grant Launched
“Let’s Stop HIV Together” Launch of HIV Anti-stigma videos
Home › all › PANCAP’s Advocacy on Justice for All – A call to Action for Equality and Human Rights
Views: 221

At the closing session of the PANCAP Share Fair on 12 September 2019, in the Republic of Trinidad and Tobago, it was clear that there was a divergence of opinion, values and expected outcomes by participants on three of the 18 elements of the Revised Justice for All Roadmap 2020-2025 (Click for Revised JFA Roadmap). These refer in particular to (a) the abolition of discriminatory laws on same-sex relations; (b) the discordance or anomaly based on  the age of consent (16 years) and that of access (18 years) to sexual and reproductive health and rights  and (c) incorporation of  Comprehensive Sexual Education into Health and Family Life Education as a basis for age-appropriate sexual education.   This divergence of opinion was more identified explicitly with differences among faith leaders on the interpretations of theological principles and practices and the assumption allegedly espoused by certain factions within FBOs that “PANCAP is pushing a gay agenda”. In this regard, Dereck Springer, PANCAP Director, wisely provided an opportunity for participants to express their ideas in a therapeutic session that reinforced the value of respectful dialogue. Stakeholders committed, notwithstanding differences, to make their respective contributions to ending the AIDS epidemic in keeping with the principles of Justice for All. 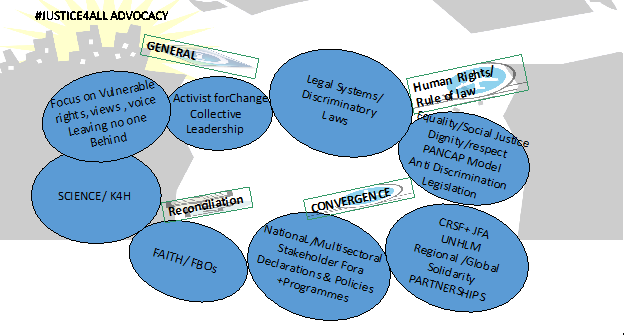 This blog is intended to amplify the elements in the diagram, which identifies four tracks to advocacy.  PANCAP Stakeholders may be committed to one or more tracks. Hopefully the progression from “general” to “reconciliation” to “convergence” and “equality and human rights” will assist in unlocking misunderstandings and/or potential conflicts toward achieving the goals of Justice for All.

PANCAP’s advocacy on the Justice for All (J4A) Roadmap resulted from a regional consultation in Jamaica in April 2014.  Its rollout has since been facilitated by Global Fund (GFATM) Grants and more recently,  through support from the 10th EDF (2018-2019).

JFA has evolved into a programme that encourages all partners to contribute to the goal of ending AIDS by 2030 based on scientific, humanitarian, religious and human rights principles and practices. These tend to shape the general thrust of advocacy in all its forms: ensuring  that people, particularly those who are most vulnerable in society are able to have their voices heard on issues that are important to them; defending and safeguarding their rights;  and having their views and wishes genuinely considered when decisions are being made about their lives.

Advocates: “speak for those that have no voice; Embrace All. Intent on leaving no one behind.”

Emerging out of the JFA programme are activist advocates who promote and support a transformation in values and attitudes to secure social justice and equality. They exist at all levels in/or across organisations/communities/institutions.

This is best illustrated by fundamentals of the JFA, on greater involvement of People Living with HIV (GIPA Principle). PANCAP’s multi-stakeholder consultations too, provided the fora for activist advocates to engage in respectful dialogue. They came from different strands:  youth leaders, key populations, including Men who have sex with men, Transwomen, parliamentarians, faith leaders and National AIDS Programme Managers.  The unifying guiding principles were provided by the International Declarations from the UN High-Level Meetings 2011 and 2016, the PANCAP Caribbean Regional Strategic Frameworks, the UN 2030 Sustainable Development Goals (especially SDG#3) and the CARICOM Strategic Plan 2015-2019.

An Activist Advocate: “Engages meaningfully with the vulnerable, is a catalyst for moving to a different level of value sharing, upholds principles to achieve stated goals.”

The Regional Faith Leaders consultation in February 2017 was a watershed in advocacy for action. The Declaration with 10 actionable recommendations that emerged from that consultation illustrates how, in principle, religious leaders integrated the UNAIDS scientific 90-90-90 Targets into their advocacy for ending AIDS. The Declaration recommended the acceptance of JFA in principle, the elimination of stigma and discrimination and the inclusion of representatives of key populations in the Steering committees of regional and national faith leaders’ networks.  The intention was to institutionalise national faith leaders’ networks to foster and collaborate on programmes, resolve divergent issues and implement common priorities based on requirements of specific religious organisations (Click for the Regional Faith Leaders Declaration).

The actual implementation of the JFA roadmap revealed the divergence in values among religious denominations that in fact, faith leaders are not a homogeneous group. The divergence has been more pronounced in response to the rulings by judges in Belize and Trinidad and Tobago, declaring discriminatory laws against same-sex relations to be unconstitutional. And further illustrated by the ruling of the Caribbean Court of Justice that “cross-dressing” in Guyana is consonant with a person’s human rights.

Some, as articulated by the Anglican Archbishop of the Caribbean and the Roman Catholic Archbishop of Trinidad and Tobago have supported decriminalising the buggery law. Others oppose siting theological principles and imposing the fear that the next step in the process is gay marriage. Yet others remain undecided while engaging in meaningful and respectful dialogue with parliamentary and civil society stakeholders.

The prospects for an accelerated response from Caribbean parliamentarians as advocates for change are mixed. Engagements under the PANCAP Justice for All programme have stimulated some movement starting with a Regional consultation of 49 parliamentarians chaired by Hon. Delroy Chuck, Jamaica’s Minister of Justice in May 2017 in Jamaica.  Since then, there have been six national parliamentarian sensitisation fora in Barbados, Belize, Jamaica, Saint Lucia, Suriname, and Trinidad and Tobago and four regional multi-stakeholder consultations.  These fora identified several major challenges that confront parliamentarians, including the weight of public opinion in most countries aligned the doctrinal values and to homophobia.  In his presentation to the Parliamentarian forum in Barbados (April 2019),  Dr Frank Anthony, PANCAP Consultant and Guyana parliamentarian stated:

“Each instance illustrates why the Law matters. Some Laws are unhelpful to health-seeking behaviour because certain groups like key populations may hesitate to interact with health services for fear of criminal sanctions. Others promote discrimination and stigmatise certain populations. Yet others expose individuals to increased violence and lower self-esteem and force them into risky behaviour”. ​

Hence, the overall recommendation has been to establish Joint Parliamentary Select Committees across CARICOM countries to deal with:

More specifically, the JCC has undertaken activities which provide models that other faith leaders networks may wish to adopt.    First, is its mapping exercise assessing values and attitudes of Faith Leaders in the AIDS response. This has enabled the Network to identify areas of consensus and differences.  Second, in response to funding issues, it has pursued several options. Among them is the signing of an agreement with the Ministry of Health as a sub-sub-recipient of the Global Fund grant. This project focuses on interventions in human rights advocacy with special focus on reducing stigma and discrimination within religious organisations generally and among religious leaders in particular. Third, as a special feature of the mapping exercise, its aim is identifying religious agencies offering services for healthy living which will serve to enhance the directory of services offered by the National Family Planning Board.

Fourth, the  RGSC has initiated a dialogue with parliamentarians providing sensitisation on issues related to sexual health and the role parliamentarians play or can play as leaders in the society, major drivers of the epidemic, and honouring various treaties signed by the government which impact human rights.

“Advocates for reconciliation recognise that values are rooted in socialisation, values are subject to change over time.”

The CCJ Project Equality is one of the best illustrations of what it takes to promote and apply the principles of human rights.  Its activities are based on evidence produced by socio-legal research with a view to examining the legal concepts of equality and non-discrimination; exploring how best to bridge the gap in trust and fairness that currently exist in the administration of Justice in the Caribbean; identifying the impediments in accessing justice commonly faced by groups at higher risk of discrimination, vulnerability and social exclusion in society and recommending steps and actions judicial officers can take to improve access to justice and secure equality before the law for vulnerable groups.

Both the PANCAP Director and I have participated in Judicial Conferences involving Judges, Magistrates and lawyers and administrators in Trinidad and Tobago (2017) and in St Kitts and Nevis (2019) at which the rollout of Project Equality was presented. Its results established the importance of applying the legal concepts of equality and non-discrimination. These hinge on the principle that “all humans are born equal in dignity and rights”  (Article 1 of the Universal Declaration of Human Rights 1948).  They provide concrete ways in which the legal advocates strive to remove stereotypes that lead to stigma and discrimination.

Advocates for Equality are critical to “Building bridges so that ‘the others’ do not stand alone”; anchoring JFA Roadmap in the universal principles of “Equality before the Law”; protection rights  ‘based on the rule of  law and scientific findings” and  “the fulfilment of all human rights entitlements.”

These elements of Advocacy for the principles of JFA illustrate the major concern for protecting the rights and views of the vulnerable. These principles are consistent with the public health outcomes required to end AIDS and are fully articulated in the PANCAP CRSF 2019- 2025. Advocacy is also concerned with breaking barriers of stigma and discrimination, which according to the results of both biomedical and behavioural research are impediments to achieving 90-90-90 scientific Targets.

They also are responses to the epidemiological trends which illustrate that key populations, especially Men who have sex with men are disproportionally subjected to barriers for access to prevention and treatment services.  But so too are other vulnerable groups including sex workers, Transgender women, the persons with disabilities and prisoners.  The JFA process through consultations and sensitisation sessions has produced a revised JFA Roadmap 2019-2025. To achieve maximum results, stakeholders at country and community levels need to take positive action for implementing the 18 actionable recommendations of the Roadmap. Fortunately, only 3 – 4 of the 18 recommendations provoke disagreement among PANCAP Partners.

With advocacy for protecting the vulnerable and with actions designed to achieve “reconciliation” and “convergence”, the optimistic outcome is that an increasing number of stakeholders will become activist advocates for equality, social justice, and the rule of law and human rights which are prerequisites for ending AIDS in the Caribbean by 2030.