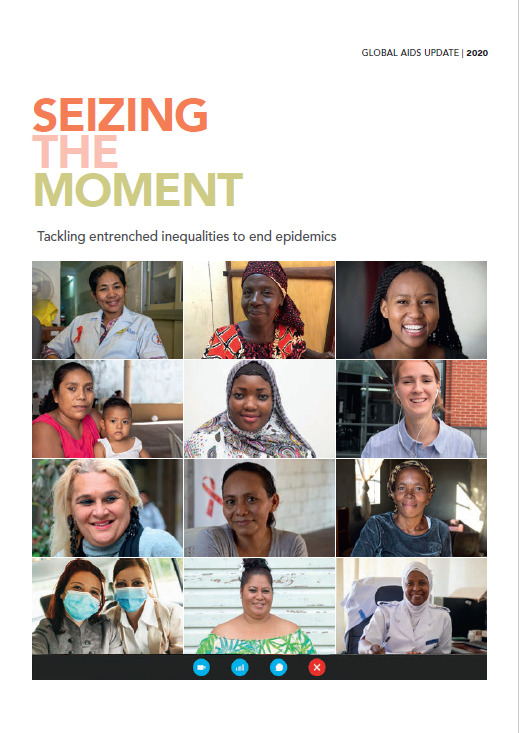 Missed targets have resulted in 3.5 million more HIV infections and 820 000 more AIDS-related deaths since 2015 than if the world was on track to meet the 2020 targets. In addition, the response could be set back further, by ten years or more, if the COVID-19 pandemic results in severe disruptions to HIV services.

GENEVA, 7 July 2020 — A new report by UNAIDS shows remarkable, but highly unequal, progress, notably in expanding access to antiretroviral therapy. Because the achievements have not been shared equally within and between countries, the global HIV targets set for 2020 will not be reached. The report, Seizing the moment, warns that even the gains made could be lost and progress further stalled if we fail to act. It highlights just how urgent it is for countries to double down and act with greater urgency to reach the millions still left behind.

“Every day in the next decade decisive action is needed to get the world back on track to end the AIDS epidemic by 2030,” said Winnie Byanyima, the Executive Director of UNAIDS. “Millions of lives have been saved, particularly the lives of women in Africa. The progress made by many needs to be shared by all communities in all countries. Stigma and discrimination and widespread inequalities are major barriers to ending AIDS. Countries need to listen to the evidence and step up to their human rights responsibilities.”

Fourteen countries have achieved the 90–90–90 HIV treatment targets (90% of people living with HIV know their HIV status, of whom 90% are on antiretroviral treatment and of whom 90% are virally suppressed), including Eswatini, which has one of the highest HIV prevalence rates in the world, at 27% in 2019, and which has now surpassed the targets to achieve 95–95–95.

The scale-up of antiretroviral therapy has saved millions of lives and new infections. However, 690 000 people died of AIDS-related illnesses last year, and 12.6 million of the 38 million people living with HIV were not accessing the life-saving treatment.

“We cannot rest on our successes, nor be discouraged by setbacks. We must ensure that no one is left behind. We must close the gaps. We are aiming for 100–100–100,” said Ambrose Dlamini, the Prime Minister of Eswatini.

Seizing the moment shows unequal progress, with too many vulnerable people and populations left behind. Around 62% of new HIV infections occurred among key populations and their sexual partners, including gay men and other men who have sex with men, sex workers, people who inject drugs and people in prison, despite them constituting a very small proportion of the general population.

Stigma and discrimination, together with other social inequalities and exclusion, are proving to be key barriers. Marginalised populations who fear judgement, violence or arrest struggle to access sexual and reproductive health services, especially those related to contraception and HIV prevention. Stigma against people living with HIV is still commonplace. At least 82 countries criminalise some form of HIV transmission, exposure or non-disclosure, sex work is criminalised in at least 103 countries, and at least 108 countries criminalise the consumption or possession of drugs for personal use.

Women and girls in sub-Saharan Africa continue to be the most affected and accounted for 59% of all new HIV infections in the region in 2019, with 4500 adolescent girls and young women between 15 and 24 years old becoming infected with HIV every week. Young women accounted for 24% of new HIV infections in 2019, despite making up only 10% of the population in sub-Saharan Africa.

However, where HIV services are comprehensively provided, HIV transmission levels are reduced significantly. In Eswatini, Lesotho and South Africa, high coverage of combination prevention options, including social and economic support for young women and high levels of treatment coverage and viral suppression for previously unreached populations, have narrowed inequality gaps and driven down the incidence of new HIV infections.

The COVID-19 pandemic has severely impacted the AIDS response and could disrupt it more. A six-month complete disruption in HIV treatment could cause more than 500 000 additional deaths in sub-Saharan Africa over the next year (2020–2021), bringing the region back to 2008 AIDS mortality levels. Even a 20% disruption could cause an additional 110 000 deaths.

“Those of us who survived HIV and fought for life and access to treatment and care cannot afford to lose the gains that took so much effort to win. In some Latin American countries we are seeing how HIV resources, medicines, medical staff and equipment are being moved to the fight against COVID-19,” said Gracia Violeta Ross, President of the Bolivian Network of People Living with HIV. “Some good lessons and practices of the HIV response, such as meaningful participation and accountability, are being ignored. We will not allow HIV to be left behind.”

To fight the colliding epidemics of HIV and COVID-19, UNAIDS and partners are leading a global call for a People’s Vaccine for COVID-19, which has been signed by more than 150 world leaders and experts demanding that all vaccines, treatments and tests be patent-free, mass produced and distributed fairly and free for all.

UNAIDS is also urging countries to increase investments in both diseases. In 2019, funding for HIV fell by 7% from 2017 to US$ 18.6 billion. This setback means that funding is 30% short of the US$ 26.2 billion needed to effectively respond to HIV in 2020.

“We cannot have poor countries at the back of the queue. It should not depend on the money in your pocket or the colour of your skin to be protected against these deadly viruses,” said Ms Byanyima. “We cannot take money from one disease to treat another. Both HIV and COVID-19 must be fully funded if we are to avoid massive loss of life.”