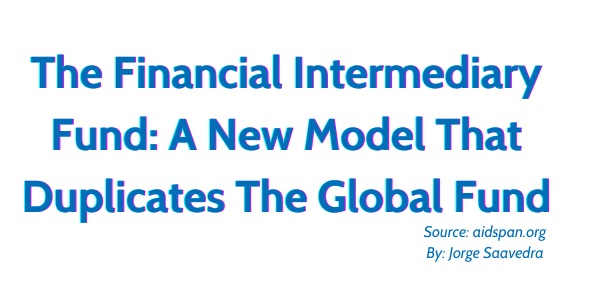 The Financial Intermediary Fund: A New Model That Duplicates The Global Fund

On 17 May 2022, the World Bank released a White Paper with a proposal to create a Financial Intermediary Fund (FIF) for Pandemic Prevention, Preparedness, and Response. For some, the idea of creating a new global fund for pandemics was only a matter of time, not unexpected and even anticipated given that the world has lost trillions of dollars due to the COVID-19 pandemic and no-one would want to go through a similar situation in the near or intermediate future.

Two background papers were prepared by the World Bank and the World Health Organization (WHO) for endorsement by the Group of Twenty (G20) Joint Finance & Health Task Force in March 2022. The documents are PPR Financing Modalities and an Analysis of Pandemic Preparedness and Response (PPR) architecture, financing needs, gaps and mechanisms.

The pandemic is not over. While the world’s predominant Omicron variant and its different sublineages do not seem to be as devastating in terms of deaths, it continues to cause tens of thousands of infections almost daily around the world. This raises the burden of disease and causes labor disabilities, flight delays or cancellations, supply chain interruptions, and other serious disruptions to society. Furthermore, the high inflation that is currently being experienced worldwide and the risk of a global recession have not only been exacerbated by the Russian invasion of Ukraine but are symptomatic of economic phenomena already being driven by the impact of the pandemic.

The Global Fund was too slow to act

Last year, when the Global Fund Board discussed its new 2023-2028 Strategy, several of us sent letters to Board members and made our position known: that the Global Fund should expand its mandate beyond the three diseases so it could explicitly incorporate prevention, preparedness and response to COVID-19 and other potential pandemics. Given that we saw the risk that a new type of Global Fund would have to be created for that purpose, we advocated for these functions to be incorporated into the work that is already being successfully performed by the Global Fund.

Unfortunately, the expansion of the mandate was not explicitly authorized.

Yet if nothing else, COVID-19 has shown us that the world was ill-prepared to deal with a global pandemic of this nature and that existing modalities were not fit for purpose and would need to be severely overhauled to deal with any such future threats.

At that time, and to some extent still remaining, there was a lot of controversy regarding the placement of pandemic preparedness and response (PPR) within the new Global Fund Strategy, with many fearing that its inclusion would detract from attention to HIV, TB and malaria. This has undoubtedly impacted on the decision not to given PPR the same weight as the three diseases and health system strengthening in the new Global Fund Strategy 2023-2028.

It is hardly surprising, therefore, that someone else has stepped in to take up the challenge of addressing global prevention, preparedness and response to future pandemics.

The World Bank’s new proposal to create the FIF has started to compete for the same international resources for global health. However, while the Global Fund model is inspired by a bottom-up approach to develop and create responses through partnerships, the World Bank model appears to adopt a top-down approach, in that a group of intellectuals have generated a model whereby donors define the flow of resources with decision-makers at the top deciding how to help poor people at the base. This is best described as a paternalistic or colonialist model and is a step backwards.

The model proposed by the World Bank seems to be inspired by organizational models from the last century. In this model, only the member states have a voice and a vote: the donors are at the top of the pyramid and the countries, which are called beneficiaries, are at the bottom. Under the proposed FIF, the implementers would be the World Bank itself, WHO, other United Nations (UN) agencies, the Regional Development Banks (RDBs), and a potential space for others defined as “etcetera” in the original White Paper.

How do the two models differ?

We can see the main components of both models below.

Table 1. A comparison of the Global Fund and World Bank implementing models

Of course, the elements listed in this table are not the only components that can be compared, there are other elements that should also be considered. For example, the track record in transparency: the mechanisms for allocating Global Fund grants are explicit and based on epidemiology and the capacity to pay indicators of each country and the country proposal is prepared and endorsed not only by the government but also by all non-governmental entities represented on the country’s CCM. In the case of the World Bank, as is the case with almost all multilateral organizations created after World War II (e.g., the World Bank, the International Monetary Fund and other Bretton Woods institutions, WHO and most UN agencies), its mandate is to negotiate only with member states. And the results of those negotiations are only made public once they are completed and the agreement has been signed. Transparency was not exactly one of the most cherished values of the last century, as it is in the current 21st century.

From another perspective, the Global Fund itself is a financial intermediary fund which temporarily receives resources from donors that are finally assigned to implementers in eligible countries. Creating a new FIF would be an unnecessary bureaucratic duplication that is based on a model that is less inclusive and potentially less impactful for countries and communities.

The reaction from stakeholders

Following the publication of the White Paper, interested parties were offered the opportunity to respond with written feedback to be received by 1 June 2022. Many of these comments from interested stakeholders – including civil society, academics, and other non-government representatives or entities – expressed concern that the Global Fund was not included in the proposed process. As a reaction to these comments, the newspaper Politico has reported that the Coalition for Epidemic Preparedness Innovations (CEPI), Gavi, the Vaccine Alliance, and the Global Fund have now been included as potential FIF fund recipients.

But is this the solution? That the Global Fund becomes a FIF recipient? Competing for FIF resources with the World Bank itself, not to mention against RDBs, other UN agencies, and WHO? Perhaps the World Bank is still not very clear about how it wants to operate the FIF: it has called on civil society and non-state actors to listen to their ideas and potentially invite them as observers, but not to sit down at the table together to make decisions jointly, at the same level as member states. This is because – according to the top-down model – they are not equal and there are hierarchies to be observed.

The fact that the World Bank is still unclear on exactly how to operate the FIF, and assuming that its creation is inevitable and will possibly be endorsed by the majority of the G20 countries, does not mean that we cannot continue to question its existence. The RDBs, UN agencies, World Bank and WHO cannot and should not be implementers, as set out in the FIF White Paper. The implementers must be the countries themselves, whether it be through governments, the private sector, civil society, and/or communities based in those countries. The role of WHO and other agencies in the UN system should be one of technical collaboration and technical partnership, but not as implementers or financial intermediaries; on the other hand, both the RDBs and the World Bank have been and must continue to be financial intermediaries.

The implications for the Global Fund

While the World Bank clearly defines exactly how the FIF will operate, one thing is obvious and must happen. The Global Fund Board, its respective Committees’ members and the Secretariat need to continue the discussion on how the Global Fund should prepare and adapt/reform itself to continue to be the most relevant actor in the global financing of prevention, preparedness and response to future and existing pandemics.

Through experience gained over the past twenty years, the Global Fund has amply demonstrated how to respond to pandemics: not only what works best but how countries can be motivated to co-invest with domestic resources so that the best possible results can be obtained. Its partnership model includes not just three diseases of pandemic dimensions, but also health and community systems strengthening within the context of a human rights and gender framework. Additionally, during these past two years the Global Fund has also shown how to respond swiftly and decisively to a fourth pandemic, allocating more than $4 billion to help developing countries fight COVID-19 through the COVID-19 Response Mechanism (C19RM) ¾ see Article 4 in this issue of the GFO, on the Office of the Inspector General‘s Audit of C19RM.

The Global Fund has shown flexibility in the past and demonstrated its ability to be nimble, and if its internal decisions impose barriers to be more effective, in doing so it reforms itself and adapts to new realities. This is reflected in differentiated funding modalities, policies for countries facing challenging operating environments or for ineligible countries in crisis, etc. In 2010, faced with a critical situation for the successful continuation of the financing of the Global Fund, its Board approved the creation of a comprehensive reform working group, whose proposed and subsequently approved plan allowed the Global Fund to quickly adapt to a new financial reality and continue developing what it knew how to do best: invest to save millions of lives.

*Jorge Saavedra is a medical doctor from Mexico, with masters’ degrees in Public Health and Health Policy & Management. He has been the Director General of Mexico’s National HIV Program and is currently President of the AIDS Healthcare Foundation (AHF) Mexico and Executive Director of the AHF Global Public Health Institute at the University of Miami. Has been a member of the Global Fund’s Latin American and Caribbean Constituency and is still a member of the Developing Country NGO Constituency on the Board.

He would like to thank Guilherme Ferrari Faviero for his edits and suggestions.