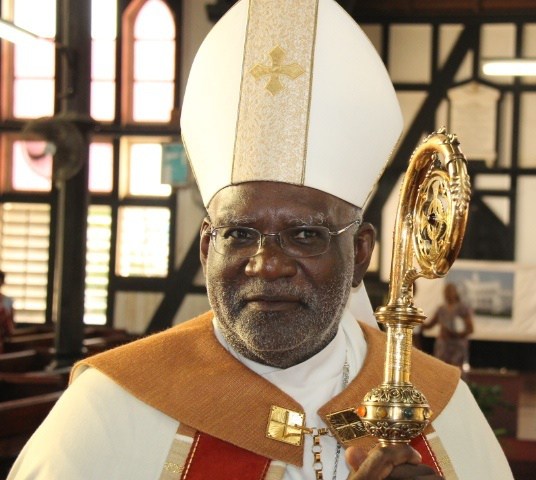 The Bishop of the Anglican Diocese of Guyana, Charles Davidson,  hosted a forum on faith for lesbian, gay, bisexual and transgender (LGBT) Guyanese at his official residence – Austin House – in Kingston, Georgetown in June 2018.

According to a release from the Society Against Sexual Orientation Discrimination (SASOD), the forum was part of a calendar of activities for the second annual Guyana Pride Festival, a week-long celebration organised by a coalition of the country’s three LGBT groups: Guyana Trans United (GTU), Guyana Rainbow Foundation (GuyBow) and the SASOD.

Homosexuality and the Anglican Church

According to SASOD, the Bishop, who leads the Anglican faith in Guyana and Suriname, said that the church has nothing against homosexuality and gay persons are accepted in the congregation, the challenge faced by many however is understanding sexuality. “We may not accept the [sexual] behaviour that you do but you are still children of God. The challenge is to try and understand sexuality. There are lots of Christians who wouldn’t even have a conversation [about sexuality] but they might quote scriptures. Jesus Christ spoke more about money more than he talked about sex. We are spending a lot of time worrying about sex when we should be spending a lot of time on an individual and their wholeness,” Bishop Davidson was quoted as saying.

He stated that people are still struggling in the Caribbean because historically same-sex intimacy was never a practice accepted in the region due to strict colonial rule. This extends to the buggery laws which he described as “crazy.” Davidson expressed hope that the laws are reviewed since they are discriminatory and recognizing that that kind of behaviour is private.

“The seventh commandment says thou shall not commit adultery, yet there is no law in the law books of Guyana that says if we catch you committing adultery we will send you to jail for two years, as the buggery law says.” He went on to say that there are members of the Church who are not married, but living with persons. “We have our own challenges in the church to begin understanding these things,” the Bishop noted.

The sixty-four-year-old Bishop expressed that in years to come life will become easier for LGBT people. He has noticed younger persons in his congregation are more educated, understanding and accepting of gender and sexual diversity. “It is not an issue for them. It is an issue for old people like me,” he remarked.

He said it is an idea that the Church itself will struggle with, but they will have to continue to struggle to fully understand without discrimination and hatred towards LGBT persons.

Bishop Davidson expressed his interest in meeting with transgender sex workers who are known to be working around the St. George’s Cathedral. “Some situations are not as loving as they ought to be but you still have to love people,” he said when talking about transgender sex workers. “I want to sit with a group of sex workers to hear their stories, to find out why they are in this position and to offer them the opportunity to find employment in a different way. I am not telling them that they are not gay. All I am saying is don’t let persons take advantage of who you are, be careful and take precautions,” he added.

SASOD’s Managing Director, Joel Simpson, committed to arranging such a meeting, stating that dialogue is indeed necessary and any support to vulnerable persons would not be turned away.

“I wish you well, make the right choices and take pride in yourself. At the end of the day, love makes the world go ‘round and the church is about love so we can’t disregard LGBT persons. The conversations will go on but the struggle continues and we wouldn’t give up,” the Bishop concluded.