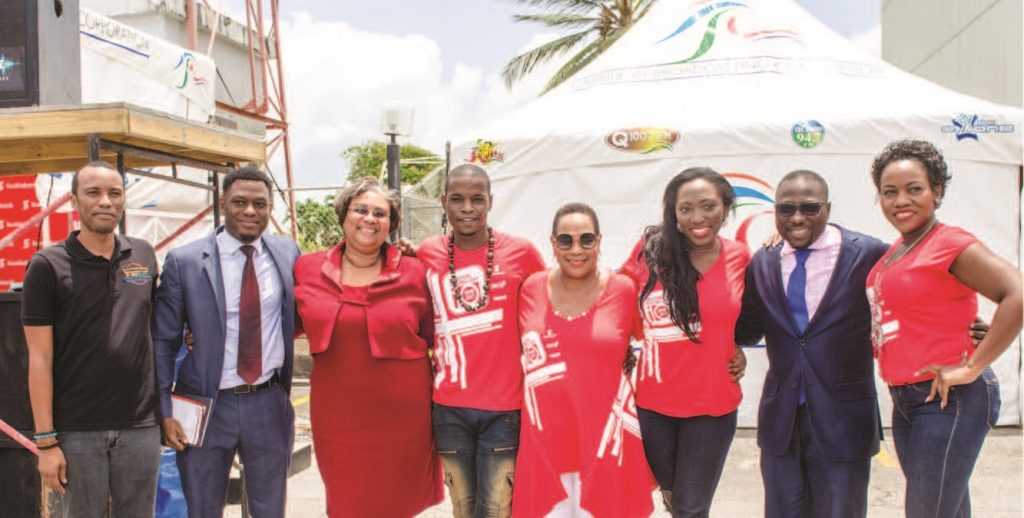 Scotiabank and LIVE UP: The Caribbean Media Alliance reflect on 10 years of hosting Regional Testing Day2017 was the final year of the joint partnership.

After ten successful years of working togeth­er to reduce the stigma associated with HIV testing, Scotiabank and LIVE Up: The Caribbean Media Alliance, wish to inform the public that 2017 was the final year of our joint partnership for the regional initiative, Regional Testing Day.

In 2017, Scotiabank formed the Interna­tional Youth Advisory Council, under the leadership of LIVE UP Executive Director Dr. Allyson Leacock. From this, ‘The Scotiabank Young People in the Community Index’ was launched, which recognizes young people as one of the world’s greatest resources. Scotiabank has therefore dedicated to committing 70 percent of all global philanthropic efforts toward causes that positively impact this segment.

With this adjustment to the Bank’s global sponsorship strategy and the untimely passing of a key member of the LIVE UP team, both entities have mutually agreed to move forward in new directions; a fitting manner in which to conclude their ten years of active partnership.

Since the initiative’s start ten years ago, much progress has been made in the fight against HIV.

The region’s successes include:

Achievements for this Public-Private Partnership (PPP) include:

• The use of over 30 Scotiabank branches in 20 countries as testing clinics.
• The bipartisan support of competing political parties across the region at the highest level of Prime Minister and Opposition Leader for regional launches.
• A robust and consistent show of support from faith-based communities across the region, especially the Barbados Evangelical Association.
• The decentralization of testing to reach targeted vulnerable communities and populations.

Work to be Highly Commended:

‘Scotiabank and LIVE UP have enjoyed a long and successful partnership with Regional Testing Day. We have by no means yet won the fight against HIV and AIDS, but our collaborative efforts went a long way towards the awareness that HIV testing should neither be feared nor avoided. I am also incredibly proud of our Scotiabankers across the region, who often stepped outside of their usual roles to ensure that Regional Testing Day was successfully executed year on year.’

Mr. Rodriguez also praised the tremendous work done by LIVE UP’s Executive Director, Dr. Allyson Leacock. ‘Dr. Leacock was, and continues to be resolute and steadfast in the fight against HIV/AIDS. One person with a desire to make a great difference was all it took to mobilize so many individuals and organizations into action. That is purpose!

She impressed my fellow Scotiabank executives both in the region and the global office, and there was never a doubt that she could deliver on what she set out to do. It was a pleasure having her as our teammate for the past decade.’

He added, ‘ … to the people of the region, continue to get tested. Regional Testing Day was the tool, but you are the catalyst, and this small but significant first step will help us to rid the world of this dreaded virus.’

His sentiments were echoed by Dr. Leacock, who thanked Scotiabank for their years of support. ‘This event has shown the region and the world that Scotiabank is a global leader that is exemplary in its philanthropic commitment to eliminating HIV from the public health landscape. Over the years, we have appreciated their support from leadership at the highest levels with Jim Tobin, Director, Sponsorship, Philanthropy and Strategic Partnerships. Our key contact, who showed a genuine interest in our progress and development throughout the years, was Roy Rodriguez, Senior Manager, Sponsorship, and Philanthropy.

As we mark the 10th anniversary of success, LIVE UP thanks Scotiabank and in particular Roy Rodriguez for his sustained interest and support throughout the decade of Regional Testing Day. The power of Public-Private Partnerships in advancing the region’s development agenda is exemplified in Regional Testing Day. Showcased as a best practice at the International AIDS Conference in 2012, we also thank the Pan Caribbean Partnership against HIV/AIDS-PANCAP for being the partner charged with mobilizing the region’s Ministries and Departments of Health. The 112 media houses in our LIVE UP partnership also played a critical role in sharing information and educating the region’s people on the HIV epidemic.’

Scotiabank and LIVE UP wish to thank the people of the region for their unwavering support of Regional Testing Day, and for positively impacting the Caribbean’s statistics year over year during the life of the initiative.