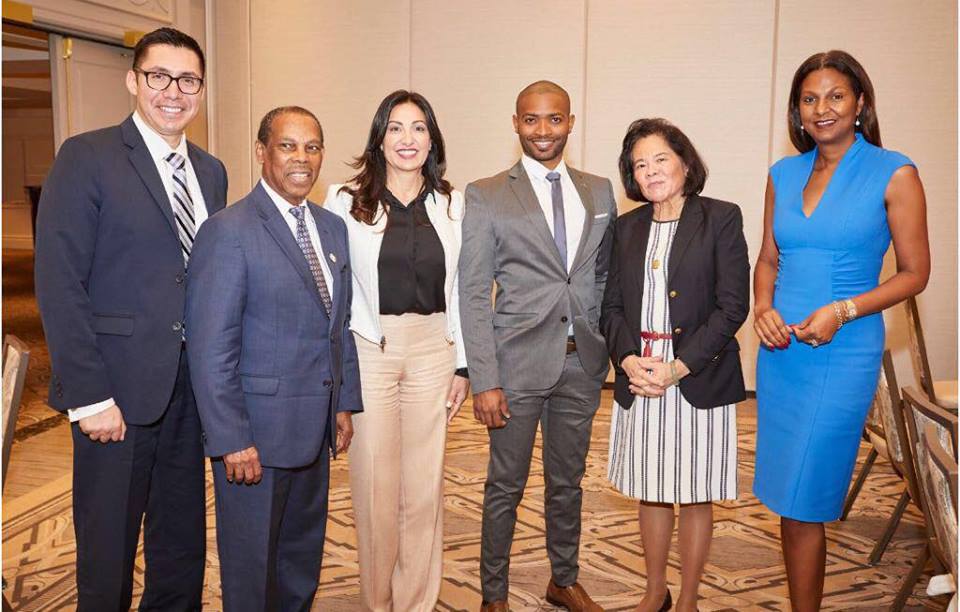 Since the Launch of the Spouses of CARICOM Leaders Action Network (SCLAN) in Belize in September 2017 emphasis has been placed on establishing partnerships to advance the objectives of the Network. On June 26, 2018, a Dialogue between the Business Centre for International Understanding (BCIU) and Spouses of CARICOM Leaders Action Network (SCLAN) was held in the Grand Ballroom, Inter-Continental Barclay Hotel, New York. SCLAN was represented by Her Excellency Mrs. Kim Simplis Barrow, Spouse of the Prime Minister of Belize (Chair) and Her Excellency Mrs. Sandra Granger, First Lady of Guyana (Vice Chair). BCIU was represented by its President and CEO Mr Jirair Tichansky who chaired the Dialogue.

Also in attendance were members of Gilead Sciences Inc., including Mrs. Elizabeth Murray, Director of Latin America Access and Emerging Markets. Since the Network’s Inception in 2017, Gilead Sciences Inc. has committed to assist the First Ladies in building stronger collaborations to maximize synergies across the regions. Through their access programs, the company assists developing countries to address high incidences of HIV, including the elimination of mother-to-child transmission by offering HIV medications at substantially reduced prices.

The aim of the dialogue in New York City was to form alliances with the Business Centre in support of the four main pillars of the “Every Caribbean Woman Every Caribbean Child” Initiative for which SCLAN advocates. These include reducing adolescent pregnancies, violence against women and girls, cervical cancer and eliminating mother-to-child transmission of HIV. These pillars fall within the priorities of the PANCAP JFA Roadmap.

Dr Tedros Adhanom Ghebreyesus, WHO Director-General and his Team, also responded positively to the initiative and agreed to foster links with  SCLAN in the context of WHO’s 5-year Development Plan which includes the goals of achieving Universal Health Coverage and responding to the health challenges of climate change especially among the SIDS in the Caribbean and the Pacific.

Mrs Barrow in thanking the participants, said ‘this dialogue has opened the doors for worthwhile partnerships that would contribute to the viability of SCLAN in its efforts to make a difference in the lives of women, girls, and adolescents in the Caribbean.”