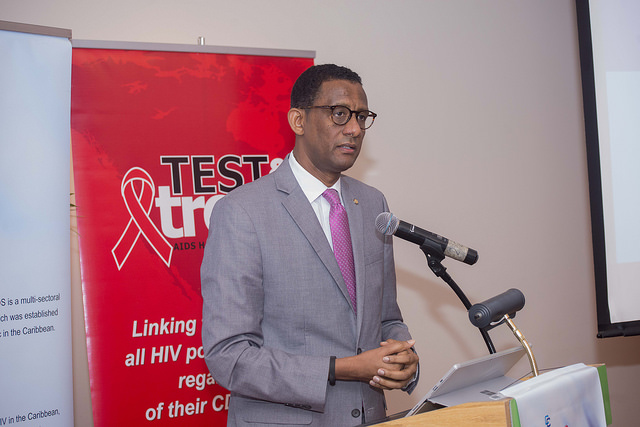 Remarks By Dr. Yitades Gebre, PAHO/WHO Representative In Suriname on the occasion of the Caribbean Regional Consultation Of Key Populations And Religious Leaders On The Right To Health And Well-being For All February 7- 9, 2018

‘Our ordinary acts of love and hope point to the extraordinary promise that every human life is of inestimable value.’ – Desmond Tutu
While the freedom of religion is a core value in a democratic society that’s protected by the Constitution, religious freedom doesn’t give anyone the right to discriminate.

The World Health Constitution states that ‘The enjoyment of the highest attainable standard of health is one of the fundamental rights of every human being without distinction of race, religion, political belief, economic or social condition’.

However, it is important to note that human rights violations and marginalization can fuel the spread of HIV and jeopardize access to HIV prevention and treatment services. Factors such as stigma, discrimination, criminalization, and violence based on sexual orientation and gender identity contribute to hindering access to healthcare and social services, as well as HIV prevention, treatment and care services for these populations. As Navars Diaz and colleagues described “Stigma is not only related to personal or social attitudes that serve to devalue a person or group, rather, these ideas are also deeply embedded in social structures that shape individual beliefs and behaviours. They are influenced by power dynamics that serve to oppress the stigmatized and maintain social control over them through the use of restrictive, stereotyped, or punitive beliefs.’ “The right to health also means that everyone should be entitled to control their own health and body, including having access to sexual and reproductive information and services, free from violence and discrimination”. WHO DG. “Everyone has the right to privacy and to be treated with respect and dignity. Nobody should be subjected to medical experimentation, forced medical examination, or given treatment without informed consent.” The study from Puerto Rico by Varas-Diaz in the case of HIV/AIDS stigma; “the stigmatisation of PWHA is not solely based on fears of contagion, but on the social use of power as a means to control particular groups and maintain hierarchies through social institutions and their representatives, such as public policymakers and medical personnel.’

As seen in many Caribbean countries ‘some research suggests that religious organisations and their leaders may interpret their role as keepers of morality and religious tradition in their communities an obligation that can appear to contradict the marginalised or stigmatised groups that are often more vulnerable to HIV infection (such as intravenous drug users or homosexual men, transgender women )’. Although some aspects of religious participation have been found to be health fostering in certain contexts, it may be that religion can also foster HIV/AIDS stigma. For example, some studies have found that religious beliefs are related to the idea that infection is a punishment from God, and that PWHA are to blame because they did not follow established moral or religious code. The United Nations Systems acknowledge that “States bear the primary duty under international law to protect everyone from discrimination and violence”. These violations, therefore, require an urgent response by governments, parliaments, judiciaries and national human rights institutions. Community, religious and political leaders, workers’ organizations, the private sector, health providers, civil society organizations and the media also have important roles to play. Human rights are universal – cultural, religious and moral practices and beliefs and social attitudes cannot be invoked to justify human rights violations against

“Another feature of rights-based approaches is meaningful participation. Participation means ensuring that national stakeholders – including non-state actors such as non-governmental organizations – are meaningfully involved in all phases of programming: assessment, analysis, planning, implementation, monitoring and evaluation.”

PAHO/WHO has made a commitment to mainstream human rights into healthcare programs and policies on national and regional levels by looking at underlying determinants of health as part of a comprehensive approach to health and human rights. Please allow me to end my remarks with one quote from the former president of South Africa, H.E Nelson Mandela. “A good head and a good heart are always a formidable combination. Indeed, we need to use our good heart and a good head to have this meeting to be successful.