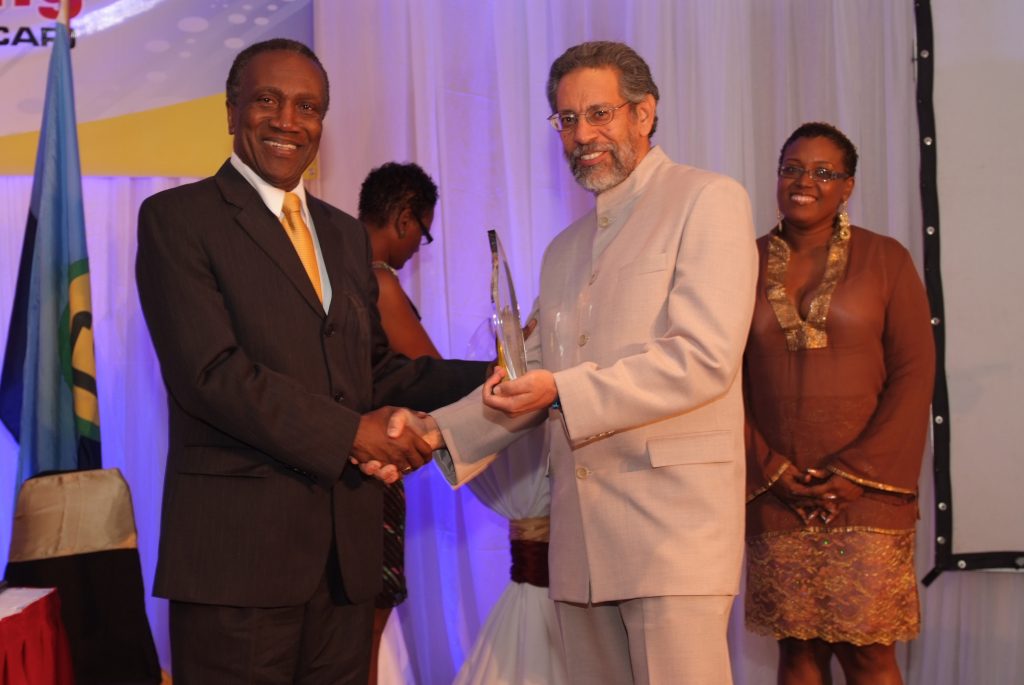 In May 2019, Dr J. Peter Figueroa was recognised by the World Health Assembly as a health leader for his substantial contribution to public health in Jamaica, the Caribbean, the Americas and the world, over the past four decades[1].

This achievement reminds us of the integral role Dr Figueroa has played in the Region’s HIV response.  In this PANCAP Feature, we reflect on his ground-breaking work and significant contributions to Public Health.

In the 1970s, after gaining his medical degree, Dr Figueroa worked in Jamaica’s Public sector.  He contributed significantly to the movement that developed Primary Health Care in Jamaica, including the introduction of community health aides, in advance of the 1978 Alma Ata Declaration. He was awarded a PhD in 1996 by the London School of Hygiene and Tropical Medicine and has since written or co-authored more than 150 published papers and co-edited three books on a range of public health topics.

As a young doctor, Dr Figueroa, motivated his colleagues in the Government service to form the Junior Doctors’ Association (JDA), now referred to as the Jamaica Medical Doctors Association (JMDA). As President of the JDA, he provided the leadership necessary to improve health services and conditions of work. Dr Figueroa also co-founded the Caribbean Public Health Association and the Caribbean College of Family Practitioners. In 1986 he earned a United Nations Peace Medal for his service as Vice-chair of the National Committee for the commemoration of the International Year of Peace.

Dr Figueroa’s roles over the years have included Principal Medical Officer – Epidemiology in the Ministry of Health; Chief Medical Officer; Director of the National HIV-STI Programme; Scientific Secretary and Chair of the Caribbean Health Research Council (CHRC); and temporary advisor to WHO on a range of public health topics.

Dr Figueroa has been instrumental in the HIV response in Jamaica, leading the response from its inception in 1986 until 2008 and transforming it into a highly successful multi-sectoral programme. He led the development of a national surveillance system and the investigation of disease outbreaks and established the Epidemiology Research and Training Unit, which conducted numerous research studies including an HIV vaccine trial.

In his early career, he was one of the few clinicians willing to provide medical care to HIV patients. Dr Figueroa continues to provide medical care for People living with HIV at his current medical practice.  In a recent interview with the WHO he stated, “Many people were afraid back then, but we had a responsibility. We had to deal with it, so I lead the response in HIV for many years”.

Established condom usage as a norm

Dr Figueroa mobilised significant funding, established condom usage as a norm nationally and developed the public access anti-retroviral treatment programme. He also expanded STI services, leading outreach for HIV testing and prevention, resulting in a reduction of HIV prevalence among sex workers from 12 to under 4 percent. In addition, Dr Figueroa has been a member of the UNAIDS scientific expert panel since 2014.

“Health is more than health. It is having a just society. It is having the social conditions in place where persons, particularly the most vulnerable are not left behind” – Dr Figueroa

Dr Figueroa’s contribution to public health in the Caribbean goes well beyond his work in HIV. He has provided technical advice to many Caribbean countries and the CARICOM Council on Human and Social Development on a variety of public health issues since the 1980s. He served on the Scientific Advisory Council of the Caribbean Epidemiology Centre and since 1989 has been the Chair of the Caribbean Immunization Managers’ Annual Meeting. He is currently part of the Technical Advisory Group for immunisations conveyed by the Pan American Health Organization (PAHO).

The University of the West Indies’ Appointments Committee conferred the title of “Honorary Professor’ in the area of Epidemiology and HIV/AIDS on Dr Figueroa.  He received this honour while serving as Chief, Epidemiology and AIDS at the Ministry of Health in Jamaica.  The honour was presented in recognition of his substantial contribution to academic life through teaching and research[2].   He is currently a Professor of Public Health, Epidemiology and HIV and AIDS at the University of the West Indies, Kingston, Jamaica, where he has developed a doctorate programme in public health.

Dr Figueroa has provided technical expertise to PANCAP since its inception in 2001. He was honoured at the inaugural PANCAP Champions for Change Awards in 2004 for his advocacy and innovation in the Region’s HIV response.  At the 15th Ordinary Meeting of the Regional Coordinating Mechanism (RCM) of PANCAP in 2010, he was selected as the recipient of the PANCAP Award for Excellence for his “substantial contribution to the HIV response”. Professor Figueroa was also Chair of the RCM in 2012 and provided leadership for resource mobilisation for the Region.  He also provided guidance as Chair of the Priority Areas Coordinating Committee (PACC) from its inception until the end of 2013. Dr Figueroa was also a pivotal figure in the development and evaluation of the various versions of the Caribbean Regional Strategic Framework on HIV and AIDS (CRSF).   He is currently the Vice Chair of the PANCAP RCM for the Global Fund Project QRA-H-CARICOM, No. 1122.

PANCAP salutes Dr Figueroa on his recent achievement; his expertise, drive and compassion for humanity will continue to inspire the Partnership and generations of public health advocates for years to come.

In an invited comment the Director of PANCAP, Mr. Dereck Springer, described Dr Figueroa as a giant in the field of public health and medicine who provides bold, decisive and insightful leadership to guide the strategic direction of the Partnership.

[2]The University of the West Indies at Mona, Jamaica https://www.mona.uwi.edu/marcom/uwinotebook/entry/1385