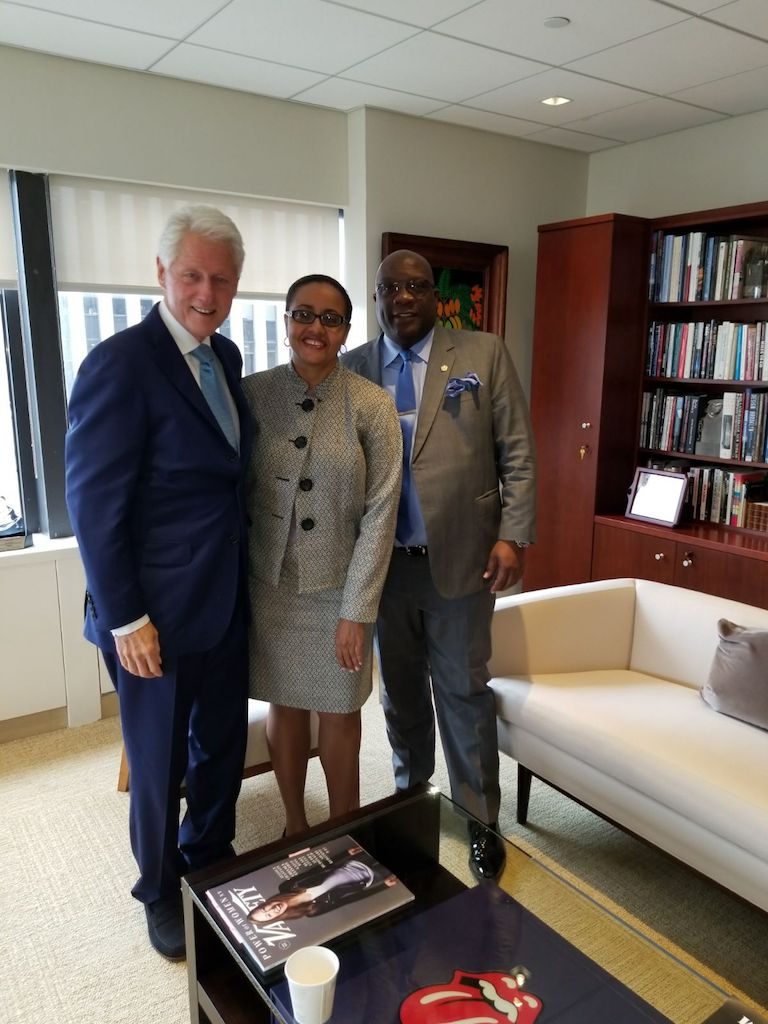 Prime Minister of St. Kitts and Nevis, Dr the Honourable Timothy Harris met with the 42nd President of the USA, President Bill Clinton, at the Clinton Global Foundation in New York on July 24. Prime Minister Harris was in New York for a forum geared at promoting partnership for expanding health care to ‘Every Caribbean Woman, Every Caribbean Child’.

President Clinton was a special guest at the event. Also present were the Most Honourable Mrs Juliet Holness, First Lady of Jamaica, Her Excellency Mrs Sandra Granger, First Lady of The Co-operative Republic of Guyana, as well as representatives from several women groups including the United Nations Population Fund (UNFPA).

In the meeting with Prime Minister Harris and President Clinton, the two statesmen discussed the success of the Clinton Global Initiative.

President Clinton, who founded the Clinton Foundation, later established the Clinton Global Initiative (CGI) in 2005 to bring together world leaders, business executives, and philanthropists as well as non-governmental organisations to effect positive change.

St. Kitts and Nevis is on the path to receiving the World Health Organization (WHO) certification as the first English-speaking country to achieve the elimination of transmission of HIV from mother to child and congenital syphilis.

Prime Minister Harris exchanged views on violence in the region, the need for the US government to do more to curtail the shipment of illegal arms to the region and the spike in gun-related violence that has occurred as a consequence of such shipments. President Clinton promises to help the region in mobilising the support of its neighbour, the USA.

Other issues of bilateral concern between the Caribbean region and the United States were also discussed.

Prime Minister Harris is accompanied by the Honourable Senator Wendy Phipps, Minister of State within the Ministry of Health, Community Development, Gender Affairs and Social Services, and Ms Ghislaine Williams from the Permanent Mission of St. Kitts and Nevis to the United Nations.