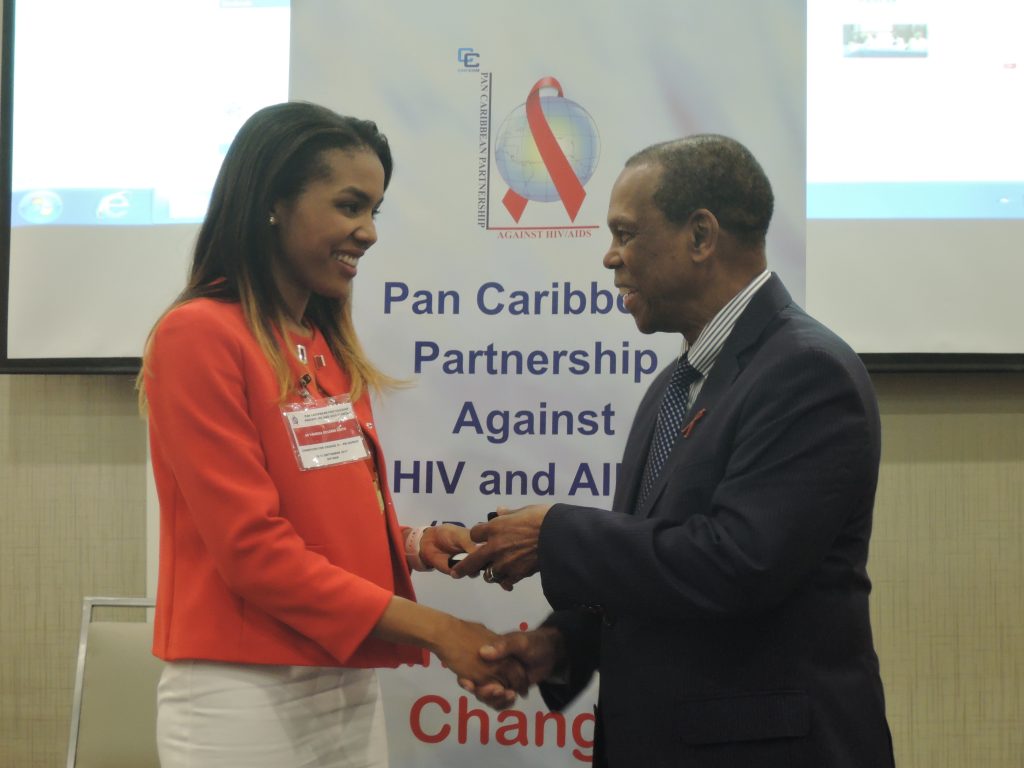 The Pan Caribbean Partnership against HIV and AIDS (PANCAP), the mechanism that provides a structured and unified approach to the Caribbean’s response to the HIV epidemic, presented Operations Manager, Centro de Orientación e Investigación Integral (COIN), Vanessa Uziely Rosario Brito, with the PANCAP Champions for Change award. The impromptu presentation occurred on the second day of the PANCAP Champions for Change IV – Relaunch (September 12 – 13) and was initiated by Director of PANCAP, Mr Dereck Springer, who stated that Ms Brito was worthy of the title due to her ‘advocacy in human rights and facilitation of key populations access to justice in the Dominican Republic and regionally’.

The Dominican Republic is an official PANCAP member and continues to make strides to reduce the spread of HIV.

Ms Brito was presented with her award by UNAIDS and PANCAP Advisor, Dr Edward Greene who referred to her many interventions for vulnerable groups including women and children; the Lesbian, Gay, Bisexual and Transgender (LGBT) community and persons living with or affected by HIV and AIDS.

She has a Law Degree from the Catholic University of Santo Domingo, Dominican Republic and a Masters in Corporate Law from the Antonio de Nebrija University, Madrid, Spain.

She is the Chairperson of the COIN Board and co-researcher on French Legislation in the field of HIV and AIDS for the University Hospital Center (CHU), Pointe-a-Pitre, Guadalupe. She is a Defense Lawyer on human rights and access to justice of vulnerable groups at the Human Rights Observatory for Vulnerable Groups of the Dominican Republic (ODHGV).

Ms Brito has studied best practices in holistic education on sexuality, sexual health and Human Rights at the Cuban National Center for Sexual Education (CENESEX). She is also the Chief Executive Officer and Founder of the Foundation for Savings, Loans and Multiple Services in Primary Health Care.

She has defended the right of access by the public to government information as the officer responsible in the Office of the Free Access to Public Information (National Office of Public Defense, Dominican Republic).

In addition to her full-time occupation as Operations Manager in the Center of Orientation and Holistic Research (COIN), she works as an independent legal consultant.

PANCAP extends congratulations to Ms Brito and anticipates collaborating on issues related to promoting amendments to the law that protect vulnerable groups and create an enabling environment for access to prevention, care and treatment without the fear of stigma and discrimination.