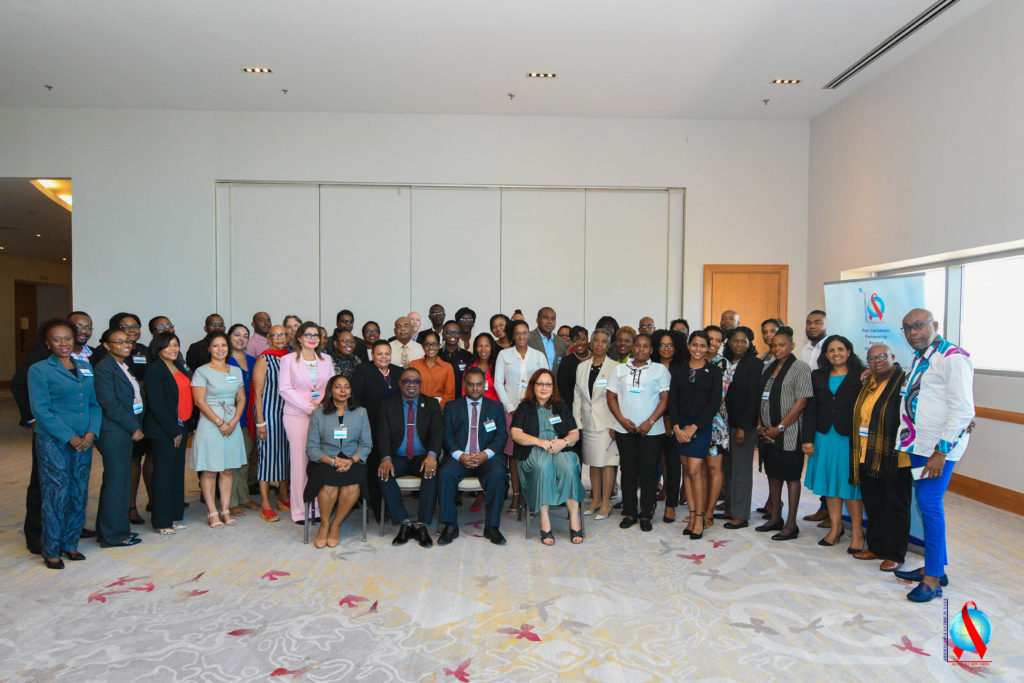 Event: Meeting to provide guidance to countries on how to operationalise the regional framework on migrant health and rights

Thursday, 11 April 2019 (PANCAP Coordinating Unit, CARICOM Secretariat): The Pan-Caribbean Partnership against HIV and AIDS (PANCAP), the mechanism that provides a structured and unified approach to the Caribbean’s response to the HIV epidemic, concluded the regional meeting to provide guidance on the implementation of the Regional Framework on Migrant Health and Rights on 11 April 2019 in Port-of-Spain, Republic of Trinidad and Tobago.

The purpose of the meeting was to facilitate input from regional stakeholders for finalising a guidance document on how to implement the Framework on Migrant Health and Rights within their country context.

The outcomes of the meeting included an agreement on a holistic approach to providing services for migrants including social services through an intersectoral strategy.

Participants emphasised that the health priorities of each territory must guide the implementation of the Migrant Framework at the country level as well as all policies governing access to migrants’ health.

Participants also agreed on the implementation of the Framework on Migrant Health and Rights at the country level in the interest of protecting and safeguarding public health throughout the region.

Participants were exposed to country presentations from Guyana and the Republic of Trinidad and Tobago, which provided details of the situation and response to Venezuelan migrants as well as experiences from Antigua and Barbuda, Belize, The Bahamas and the Organisation of Eastern Caribbean States (OECS).  These experiences illustrated the need for the implementation of the Framework to ensure consistent access to health by migrants.

There was also broad agreement on the need to implement the Framework at the country level from a Human Rights perspective.

Participants also recommended research into sourcing a financial mechanism to mobilise funding for access to all healthcare by migrants.

Building strategic partnerships within the public health system to advance holistic treatment for migrants was proposed as a necessary step which would provide immediate results for improving access to services by migrants.  Participants also advocated for creating strategic alliances with social services to offer comprehensive care for migrants including sexual and reproductive health services, housing, nutrition, etc.

There were calls for an education, training and sensitisation programme for immigration and border patrol officers to provide guidance on the health, social and psychological requirements of migrants.

Educating the media on the positive impact of migration and highlighting the benefits of integrating migrants into society through public awareness communication campaigns was also recommended. Participants emphasised the need to utilise the regional media to highlight the positive aspects of migrants’ culture to reduce negative perceptions.

Mr Dereck Springer, Director of PANCAP, committed to PANCAP continuing high-level engagements with policymakers, including Ministers of Health and Finance and the CARICOM Secretariat to advocate for access to health by migrants as a public health priority.

The Director highlighted that PANCAP would follow up with countries on the implementation of the Migrant Framework through the PANCAP Justice for All Programme and the PANCAP Policy and Strategy Working Group on Stigma and Discrimination.

The PANCAP Director concluded the meeting with a challenge for participants to advocate at the country-level for an intersectoral holistic approach to providing services for migrants which would incorporate their social and psychological needs.  He noted that the draft guidance on the implementation of the framework proposed by participants is not prescriptive and can be adapted based on the requirements of each territory.

CARICOM governments have signed on to the International Organization for Migration (IOM) and other relevant international conventions as evidence of their commitment to protect and promote the rights of migrants. The International Convention on the Protection of Migrant Workers and Members of Their Families 1990 is the most comprehensive instrument protecting the rights of migrants but only St Vincent and the Grenadines has ratified this convention.  With respect to migrant workers, some countries have ratified the following conventions: #97 Migration for Employment; #111  Concerning discrimination in respect of employment and occupation; and #138 Concerning minimum age for admission to employment.

Previous assessments/studies have found that in the majority of countries, the HIV-related needs of migrants and mobile populations are not integrated in the national HIV response and existing health care programmes. Little data is available on diverse mobile populations and there are no culturally and linguistically appropriate HIV intervention programmes targeting mobile populations, especially high-risk groups including sex workers and MSM.  Strict immigration policies adopted by some governments may drive sex workers underground, thereby making them and their clients more vulnerable to contracting HIV. Migrant workers in some countries are consistently listed among the most vulnerable populations owing to, among other factors; their legal status, lack of access to information and services, language barriers and poverty. However, to date no comprehensive strategies exist to address HIV prevention among this vulnerable population. There is limited understanding of the profile of the epidemic among migrant workers or the factors that increase this population’s vulnerability to HIV.

Given the challenges outlined above PANCAP, with funding from the Global Fund in June 2018, developed a regional rights-based framework to increase the access of migrants and mobile populations to HIV prevention, care, support and treatment.

The Framework sets out a roadmap for equitable and non-discriminatory access to health care services across the Caribbean for mobile and migrant populations regardless of age, race, colour, sex, language, religion, political or other opinion, national or social origin, sexual orientation, gender identity, property, birth or other status. The Framework responds to the findings of two multi-country studies conducted by PANCAP over the period 2011 – 2015 which highlighted the barriers to access HIV services by migrant and mobile populations. Following a participatory approach involving representation from Government, (Ministry of Health, Chief Medical Officers, National AIDS Programmes, Immigration Officers) Civil Society (Migrant groups and other key population groups) and international and regional organisations including, PANCAP, UWI, IOM, UNHCR and UNAIDS at a regional forum in Trinidad and Tobago from the 26-27 June 2018, the mandate was for the development of a more comprehensive roadmap for a Regional Rights-Based Framework to Increase the Access of Migrants and Mobile Populations to HIV Prevention, Care, Support and Treatment.

The Framework is rationalised with the vision of regionalism under the CSME and sets out guiding principles and recommended strategies for regional and national action. The Protocol on Contingent Rights was adopted and opened for signature at the 39th Regular Meeting of the Conference of Heads of Government of the Caribbean Community held in Montego Bay, Jamaica on 4-6 July 2018. It was signed by seven countries (Barbados, Grenada, Haiti, Jamaica, Saint Lucia, St Vincent and the Grenadines and Suriname) but is not yet in force. The Protocol grants rights to CARICOM nationals exercising the right of establishment, provision of services, movement of capital or free movement of skills. Spouses and immediate dependents are also entitled to enjoy these rights.

The Framework on Migrant Health and Rights was subsequently endorsed by the Priority Areas Coordinating Committee (technical committee of the PANCAP Executive Board), PANCAP Executive Board and the Council for Human and Social Development – Ministers of Health). The Priority Areas Coordinating Committee recommended that PANCAP should identify a model that can be used to guide countries in operationalising the Framework to their county context.