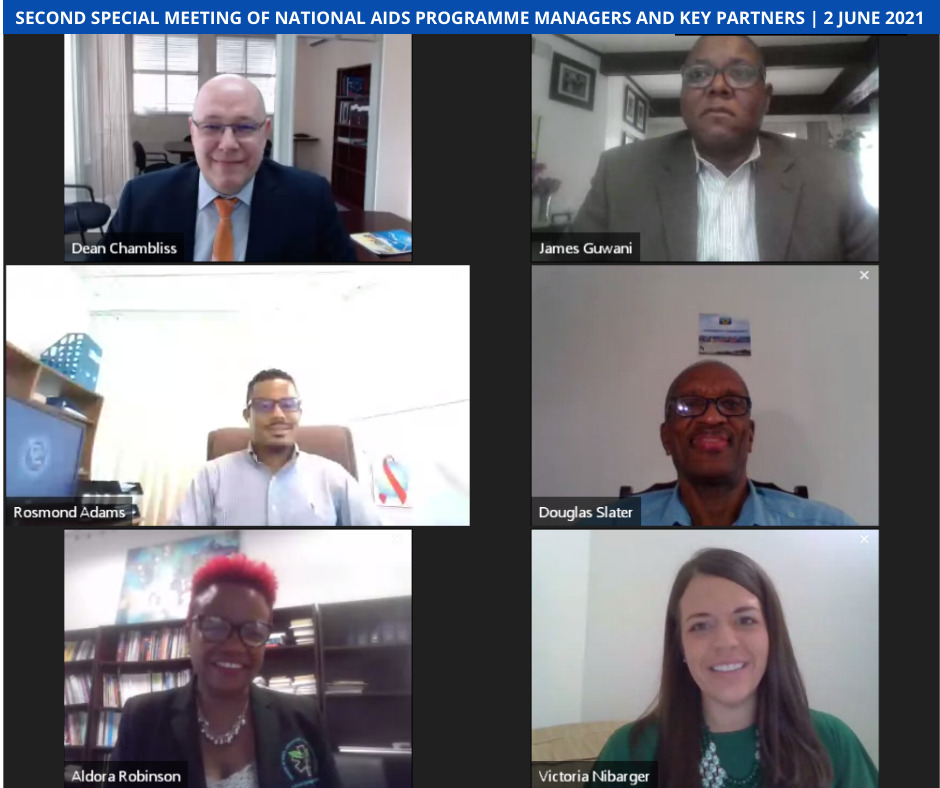 Wednesday, 2 June 2021 (PANCAP Coordinating Unit, CARICOM Secretariat): The Pan-Caribbean Partnership against HIV and AIDS (PANCAP), the mechanism that provides a structured and unified approach to the Caribbean’s response to the HIV epidemic, commenced the Second Special Meeting of National AIDS Programme (NAP) Managers and Key Partners (Virtual), Wednesday, 2 June 2021.   The three-day meeting focused on the impact of the COVID-19 pandemic on national and regional HIV programmes.  The meeting also discussed how countries are coping and adjusting programme delivery during COVID-19 to ensure sustainability.

In his opening remarks, Dr Rosmond Adams, Director, PANCAP, acknowledged that COVID-19 had exposed weaknesses in health systems at the global, regional and national levels. “It is important for us to ensure that the gains made against HIV that are threatened by the disruptions caused by the pandemic are maintained and that we continue to work as a Region to end AIDS by 2030”, stated Dr Adams.

Dr Adams underscored that the epidemic is fueled by stigma and discrimination, marginalisation and criminalisation of communities and lack of access to health, education and other essential services.  He also emphasised that the widening inequity gaps further compounded these factors. Key populations and their partners continue to be disproportionately affected by the epidemic.

The PANCAP Director reiterated PANCAP’s commitment to work with countries and Key Partners to ensure that no one is left behind. “We will continue to advocate for increased domestic funding for HIV”, stated Dr Adams, “We continue to encourage countries to engage Civil Society Organisations (CSOs) and communities by investing in civil society and community-led responses that tailor approaches to the needs of affected communities, particularly Key Populations, and to build strong primary health care systems that can deliver quality, people-centred care”.

Mr Tyrone Ellis, Chair, Caribbean Regional Network of People Living with HIV/AIDS (CRN+), led the meeting in a moment of silence to acknowledge persons who have died from AIDS and COVID-19 in the past year.

“With access to overall health care reduced during this pandemic, lockdowns and physical distancing exposed marginalised populations to a host of other threats including intimate partner violence, income loss, homelessness, and anxiety,” stated the CRN+ Chair.  He expressed gratitude to health care professionals for continuing to offer HIV prevention, treatment, care and support during COVID-19.

Ms Aldora Robinson, Director of Health Promotion and Advocacy Unit, Ministry of Health, Agriculture and Human Services, Turks and Caicos Islands, underscored that there are still gaps in HIV services.  She urged stakeholders to find ways to link mental health resources and People Living with HIV (PLHIV).  She explained that this intervention would make HIV care and treatment for clients more impactful and holistic, especially during COVID-19. She also illustrated how COVID-19 has disrupted services, interrupted supply chains and caused persons to access HIV prevention, care and treatment differently. “These disruptions must be overcome, and lessons must be learned as we move forward”, stated Ms Robinson.

Ms Nibarger highlighted that the Region could anticipate additional new funding via the American Rescue Plan Act, to support the recovery of HIV programmes from COVID-19 related impact and prevent further damage. “For Jamaica and Trinidad and Tobago alone, we have received approval for an additional $1 million United States dollars in assistance, which will help meet needs in lab, mental health, vaccine advocacy, and more,” stated the PEPFAR Coordinator.

In addition, Ms Nibarger explained that the Caribbean Regional PEPFAR Program received approval for the next Regional Operational Plan. “We are so happy to report that we have received a budget increase, to more than $23 Million United States dollars, which we will use to support activities in Jamaica and Trinidad and Tobago, as well as regional programming via PANCAP”, stated the PEPFAR Coordinator.   She also said that PEPFAR is pleased to have the opportunity to extend programming in Guyana, where an additional $1.5 Million United States dollars will be provided to the government and civil society partners through fall 2022.

“We also have separate PEPFAR programmes in Haiti and the Dominican Republic, so it’s a robust presence across the Caribbean – and a signal of our unwavering commitment to working hand-in-hand to see an AIDS-free future for the Region,” stated Ms Nibarger.

Dr James Guwani, Director, UNAIDS Caribbean Sub-Regional Office, declared that 2021 was a year of renewal — an opportunity to take stock of progress, reflect on lessons learned, and lay the groundwork for more optimised HIV responses in the future.  He acknowledged the achievements of National AIDS Programmes and Health Ministries, supported by civil society and the development community to provide treatment to all despite challenges with existing antiretroviral therapy protocols. He reported that at the end of 2020, 82% of PLHIV in the Caribbean were diagnosed, two-thirds of PLHIV were on treatment, and 59% of PLHIV were virally suppressed.

Dr Guwani highlighted that the expansion of rapid testing, community-based testing and more streamlined lab services has contributed to four in five PLHIV being aware of their status by the end of 2020.  However, he underscored that there is a clear path toward even better results.

While referring to the need to address the social determinants that lead to new HIV infections, delayed diagnosis and poor adherence, Dr Guwani urged all stakeholders to ensure that their concerns are included in the 2021 Political Declaration. He also advocated for all stakeholders to participate at the upcoming United Nations General Assembly High-Level Meeting on HIV and AIDS 2021.

Mr Dean Chambliss, Sub-regional Director for the Caribbean, PAHO/WHO, reiterated  PAHO’s commitment to working with its Member States to expand HIV prevention and treatment services based on global evidence-based interventions; while at the same time ensuring universal access and coverage are guaranteed for everyone, including vulnerable populations

He advised that as countries advance in the expansion and provision of high-quality HIV prevention and treatment services, it was necessary to note that achieving universal access and coverage requires a robust integrated approach.  The approach should include integrating services for HIV within primary care facilities and other health conditions, such as other sexually transmitted infections that have not received the same level of attention as HIV.  “Global evidence clearly shows a link between STIs and HIV, and therefore an investment in STIs is an investment in HIV prevention”, stated Mr Chambliss.

He explained that the integration of HIV with Viral hepatitis is of utmost significance as countries advance with the implementation of Pre-exposure prophylaxis (or PrEP) for key populations.  “We know that both Hepatitis B and C are bloodborne, share similar modes of transmission as HIV, and affect key populations”, stated Mr Chambliss, “WHO estimates that Hepatitis C virus affects 2–15% of PLHIV worldwide and up to 90% of those are people who inject drugs”.  He also emphasised that Chronic Hepatitis B viral infection affects an estimated 5–20% of PLHIV.

Based on PAHO’s estimates for the Caribbean, there are approximately 887,000 people chronically infected with Hepatitis B and 240,000 with chronic hepatitis C.  The profiles of these individuals are unknown. Therefore, integrating services for viral hepatitis with HIV will spotlight the public health problem while giving the Region better information on who is affected.

Dr Douglas Slater, Assistant Secretary-General, Human and Social Development, CARICOM Secretariat, applauded the Region’s Public Health workers.  He indicated that a key objective during this time is protecting the gains made in the HIV response as Public Health systems are challenged with managing COVID-19.

He also acknowledged the immense gains the Region has made in the HIV response.  “Through collaborative efforts of CARICOM-PANCAP and Member States, the Caribbean has seen significant achievements at the end of 2019, including a decline in overall regional prevalence from 2.2 % to less than 1.1% in 2019; a decrease in new HIV infections by 29% in the Region since 2010, a reduction in AIDS-related deaths by 37% since 2010 and total antiretroviral treatment coverage for the Region was 63%–71% for women and 56% for men (compared to 5% in 2001).

Dr Slater recognised the tremendous progress with the Elimination of Mother-to-child Transmission of HIV in eight countries, including Anguilla, Antigua and Barbuda, Bermuda, Cayman Islands, Cuba, Dominica, Montserrat and Saint Kitts and Nevis.

The ASG underscored that beyond COVID-19, the Region’s HIV response mandate had expanded significantly with the new targets set out in the UNAIDS’ “Global AIDS Strategy 2021–2026, End Inequalities, End AIDS.”  He reminded participants that Member States have bold new targets and policies to be reached by 2025.

“We already have a roadmap for achieving the targets of the new strategy”, stated Dr Slater, “the theme of ending inequalities and access to health for all is embodied in the PANCAP Model Anti-discrimination Legislation, which despite extensive engagement by PANCAP, has not yet been adopted by any Member State.  Propelled by the new Global AIDS Strategy, it’s time that we change this”.

Dr Slater concluded the opening ceremony by applauding the participants for their dedication to the HIV response, “I challenge you to ensure your voice is heard as we face the challenges of COVID-19 and propel the Region’s HIV response to new heights of success”.