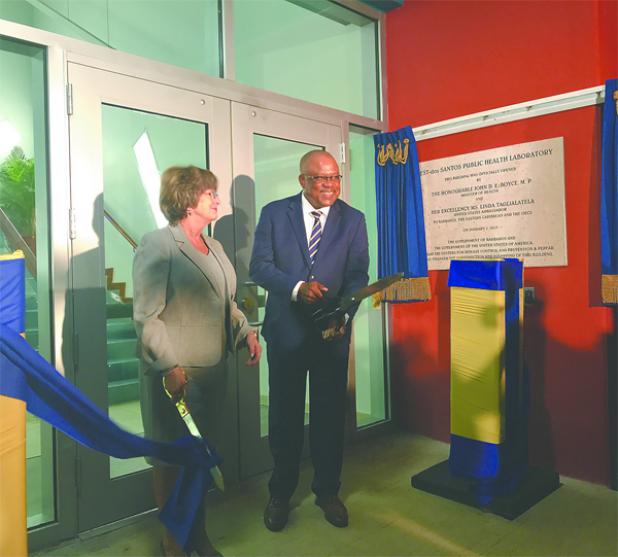 PANCAP congratulates the Government of Barbados on the opening of new public health laboratoryPANCAP Director deems the achievement a significant milestone.

The Pan Caribbean Partnership Against HIV and AIDS (PANCAP) congratulates the Government of Barbados on the opening of the Best-dos Santos Public Health Laboratory.  Director of PANCAP, Mr Dereck Springer deemed the achievement “a significant milestone and a positive step for health care in Barbados”.

Minister of Health, John Boyce, stated: “the opening of the Best-dos Santos Public Health Laboratory marks a new milestone in the public health development of Barbados”.

“This ceremony represents a significant milestone for us here in Barbados and celebrates the tangible beginning of a new phase in public health,” stated the Minister.

“It is indeed exciting to be a part of this opening ceremony for this new facility, which has the capacity to act as a Reference Laboratory for Barbados and the Caribbean.”

Dr Kenneth George, Acting Chief Medical Officer, expressed that the opening ceremony served also as a celebration that signified the renewal and expansion of their capacity in primary health care in Barbados, which they would not have reached without the tenacity and foresight of dedicated teams, both local and international.

“The journey of public health in Barbados has been punctuated by many success stories. From the elimination of measles to the universal acceptable levels of sanitation, to the universal access to primary healthcare, to the procurement of safe and efficacious pharmaceuticals, to the development of our national response to non-communicable diseases and, more recently our continued collective responses to the epidemics of influenza, Ebola, Chikungunya and Zika,” he said.

“This journey could not have been achieved by the Government of Barbados on its own, but through technical support, expertise and financing given by many regional, international and multilateral partners including UWI, the Caribbean Public Health Agency, WHO, PAHO, the Centres for Disease Control and Prevention and of course, the Government of the United States of America”.

He strongly expressed that it was his belief that public health represented the building of policies and programmes to strengthen the health and wellness of our population through drawing on the attributes of information sharing, strategic planning, quality assurance and monitoring and evaluation.

Following the opening ceremony, Minister Boyce, Dr. George and other officials, such as Her Excellency Linda Taglialatela, United States Ambassador to Barbados, the Eastern Caribbean and the OECS; and Laura Griesmer, Deputy Chief of Mission at the embassy of the United States of America, were treated to a tour of the new facilities.