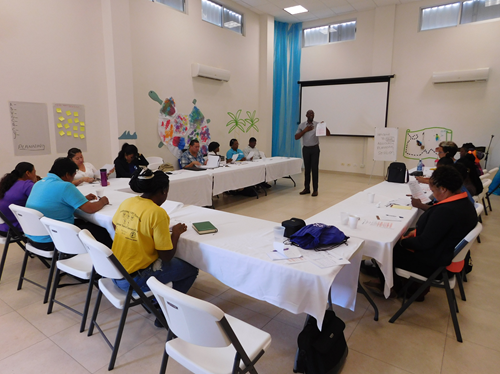 In July the National AIDS Commission (Belize) and the Caribbean Vulnerable Communities Coalition (CVCC) partnered on several training sessions designed to empower and strengthen civil society organizations (CSOs), non-governmental organisations (NGOs) and key populations involved in the HIV and AIDS response in Belize. These sessions were done in Belize City and Dangriga Town, which are considered high burden areas. The main objectives of the sessions were:

– To have greater support and involvement of CSOs in the HIV and AIDS response
– To strengthen linkages between communities and the health care systems
– To identify barriers, gaps, areas of synergy, and future action that will assist in reaching the 90-90-90 targets

The sessions entitled ‘Reaching the 90-90-90 targets in the Caribbean through Local Authority and Civil Society Partnerships’, were facilitated by Dr Carolyn Gomes, Executive Director of CVCC and her co-facilitator Ms Kandasi Levermore, Executive Director of Jamaica AIDS Support for Life (JASL). These were completed in Belize City on July 18th-19th and in Dangriga Town on July 20th-21st and focused primarily on how to achieve the treatment targets for the Caribbean and provided an in-depth overview of the HIV and AIDS situation in the Caribbean and Latin America as well as exploring the achievement of the 90-90-90 targets by 2020.

In her discussion, Dr Gomes explained that in 2015, donors provided governments with $7.53 billion US dollars for HIV Programmes, a 13% decline in funding since 2014 due to competing priorities, humanitarian emergencies, refugee crises, and fiscal austerity among other factors. As funding gaps threaten to derail the response to HIV patients, countries will increasingly need to fill gaps and find more efficient and cost effective ways to fund their response. A survey of HIV focused organizations, conducted by UNAIDS in 2012 and 2013, revealed that the majority of respondents reported experiencing decreases in funds for HIV and human rights related work.

The experiences with the PANCAP Round 9 Grant work with CSOs reveal that there is a need for greater prioritisation of key interventions that are evidence based and target individuals at highest risk, as well as the need for early and wide dissemination of findings and frank discussion of epidemiological data. NGOs and other implementers need to be provided with guidance on the focus their programmes should adopt as well as build local authority and civil society partnerships for greater success.

Dr Gomes and Ms Levermore spoke about the need for a collaborative response in order to reach collective national and regional goals. With regard to CSOs and government, there needs to be a strengthening of dialogue in order to have more partnerships and collaboration between all parties.

On July 26th the National AIDS Commission, Centro de Orientacion E Investigacion Intergral (COIN) and CVCC collaborated to address the needs and capacities of the populations served by the NAC during a one-day session entitled: ‘Challenging Stigma and Discrimination to improve access to and quality Of HIV Services in the Caribbean’.

Mr Ivan Cruickshank, CVC representative and programme facilitator opened the session with a statement of intent and the shared programme objectives which were to review and assess agency/country specific advocacy plans, to assess relevance in response to changing circumstances; to improve knowledge sharing among partner agencies, share lessons learned so others can benefit from their experiences; to develop a National Advocacy Plan using data (both quantitative and qualitative) to inform advocacy, and make arguments that support policy proposals to help make advocacy efforts more viable. The exercise included the development of effective advocacy messages specifically for target audiences.

The purpose of the session was the empowerment of advocates to move their agendas forward, hence local agencies were asked to present on their experiences within Belize and how systems help to uphold their rights and causes. Presenting agencies were: UNIBAM, CNET+, PETAL, Our Circle and TIA Belize. After the presentations and group discussion, Mr Cruickshank engaged participants in the development of a national advocacy action plan which focused on alleviating treatment care and support issues for populations, to promote legislative reform that advances anti-discrimination, stream line health services for key populations and to highlight the effects of adult ARVs on children which were tied to increasing the number of persons accessing and retained on treatment country wide to contribute to the 90-90-90 Targets.

From July 27th to 28th, the NAC and CVC embarked on a CSO directed Legal Literacy workshop as a part of a three-year regional project entitled ‘Challenging Stigma and Discrimination to Improve Access to and Quality of HIV services in the Caribbean’. The project is being implemented in eight countries in the Caribbean including Belize.

The programme is designed to build the capacity of members of various key populations to identify and address discrimination and to contribute to increased community participation in decision making in the national HIV and AIDS response.