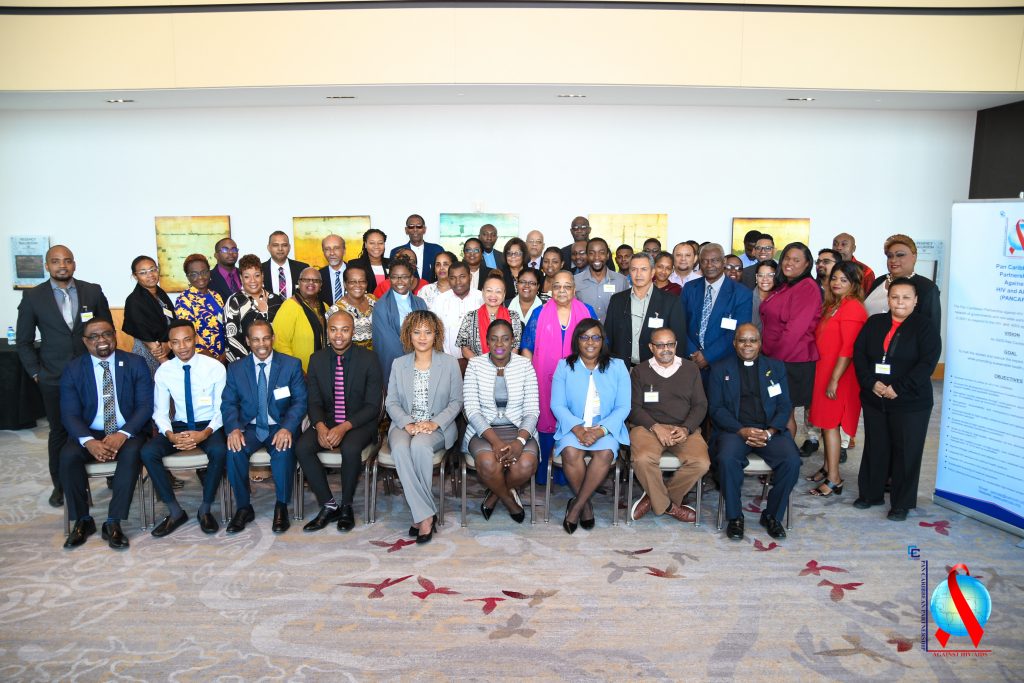 Wednesday, 25 April, 2018 (PANCAP Coordinating Unit, CARICOM Secretariat): The Pan-Caribbean Partnership against HIV and AIDS (PANCAP), the mechanism that provides a structured and unified approach to the Caribbean’s response to the HIV epidemic, concluded the Joint Regional Dialogue with Faith Leaders, Parliamentarians, Civil Society Leaders, National AIDS Programme (NAP) Managers and Youth Leaders in Port-of-Spain, Republic of Trinidad and Tobago with an urgent call from stakeholders for creating an enabling environment to reduce discrimination which acts as a barrier for vulnerable groups accessing health services and hinders efforts to reduce HIV infections.

The Dialogue, which included approximately 60 delegates from 14 Caribbean countries, was intended to facilitate an examination of national and regional issues and goals for ending HIV, and to take into consideration the targets established by the United Nations High Level Meeting Political Declaration June 2016 on ending the AIDS epidemic by 2030;  the 2030 Sustainable Development Goals approved by 192 nations at the United Nations in September 2015, and the commitments made by civil society, faith-based and other implementing stakeholder groups for ending AIDS during the PANCAP consultations in 2016 and 2017.

Participants were tasked with proposing initiatives within the context of the CARICOM Model Anti-Discrimination Legislation and the PANCAP Justice for all Roadmap.

Create an enabling environment to prevent stigma and discrimination

Among the strategic initiatives proposed by the wide cross-section of stakeholders was the creation of an enabling environment to prevent stigma and discrimination, which participants indicated, would reduce the incidence of HIV, increase testing, increase the number of people receiving antiretroviral drugs which would result in less deaths from AIDS and cost-saving within the health-care sector.

Participants underscored the importance of removing the barrier of discrimination as critical to the region achieving the 90-90-90 Targets by 2020, and keeping on track for ending AIDS by 2030.

To achieve the removal of discrimination as a barrier, participants proposed a Public Awareness Campaign on the CARICOM Model Anti-Discrimination Legislation targeted at Human Rights Activists, parliamentarians, faith leaders and youth.  The campaign is intended to educate these stakeholders on the use of the Model Legislation as a tool for mobilizing action to reduce instances of discrimination against vulnerable groups.

Utilizing established mechanisms such as the Youth Parliament and similar platforms to increase awareness of the Model was also proposed as a mechanism for sensitizing key stakeholders including subject ministries and ministers responsible for reporting on Member States’ human rights obligations.

Standardize HIV education across the Region

The lack of standardized HIV education at the tertiary level was identified as a barrier for reducing HIV infections; participants proposed advocating for the introduction of such a programme through collaborations with Ministries of Education with the intention of exposing youth within vulnerable groups to new data on HIV and AIDS.

Participants underscored the importance of highlighting the connection between saving costs within the health care sector and reducing HIV infections.  A detailed, evidence-based proposal illustrating the financial savings from reducing HIV infections was proposed as a mechanism to empower parliamentarians to advocate at the highest-level for domestic funding for the HIV response.

Next steps for stakeholders

National AIDS Managers, Civil Society Leaders and Youth Leaders committed to working collaboratively at the national level to advance elements of the PANCAP Justice for All (JFA) Programme, including policy advocacy for the provision of psychosocial support as part of the elements of the JFA Roadmap; addressing social protection issues including domestic violence through interagency collaboration and social determinants of health; mapping civil society service delivery; and to strategically  collaborate with Live Up! The Caribbean Media Alliance.

Faith leaders committed among others to continuing and strengthening their response to HIV; sharing best practices within the faith community; delivering education to address stigma and discrimination; highlighting the responsibilities that are associated with sex, and providing love and compassion.

In his closing remarks, Dr Edward Greene former UN Secretary-General Special Envoy for HIV in the Caribbean, now PANCAP Special Advisor challenged participants to remain committed to the proposed review of the PANCAP Justice for All Roadmap and to enact the proposed initiatives with the overarching aim of successfully achieving the 90-90-90 Targets by 2020, and keeping on track for ending AIDS by 2030. He also challenged secular and faith stakeholders to foster age-related sexual education, promote tolerance and respect and to reconcile the difference between the rule of law and theology through respectful dialogue.