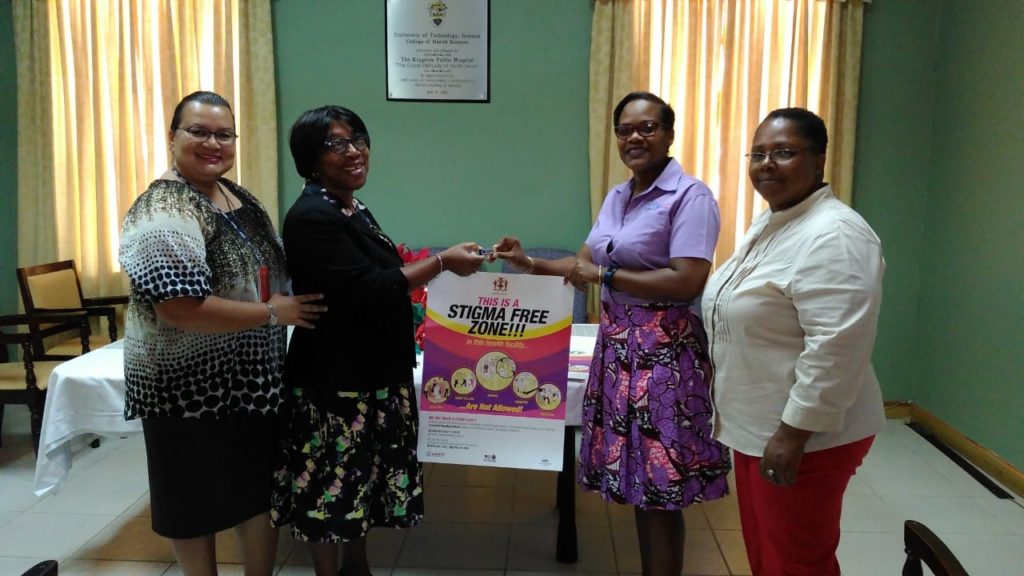 The Total Facility Approach to S&D-reduction Project is a three-phase project commencing with the collection of baseline stigma and discrimination (S&D) data from both health care providers (HCP) and People Living with HIV (PLHIV) clients at three sites including the Kingston Public Hospital (KPH), Windward Road Health Centre (WRHC) and Savanna la Mar Public General Hospital (SPGH). It was implemented over the summer of 2017.

The findings were later disseminated to each site, and at a national dissemination meeting in September 2017.  The final report was finalized in March 2018.  The data and feedback from these meetings were then used to tailor facility-based S&D-reduction activities for each facility for the second phase which encompassed capacity building including the development of a facilitators guide for Jamaica titled “Towards Stigma Free Health Facilities in Jamaica: Western and Southern”.

The draft guide was then used to train staff of the KPH and SPGH, members from HIV-related Civil Society Organizations and staff of the National Family Planning Board Jamaica (NFPB) and HP+, using a Training of Facilitators (ToF) approach.

Training (which is the beginning of phase two) was conducted in S&D-reduction strategies using participatory methodologies over five days by Ayana Hypolite, Master Trainer/Counselor from RTI/Barbados and Joy Crawford, local Master Trainer and Co-founder and Director of Impact for Eve for Life.

The aim of the training was to strengthen the capacity of the co-facilitators with capacity building on the procedures, tools and expectations for S&D-reduction programming.  It was intended that the knowledge gained would be disseminated to staff of the three facilities.   The guide was then finalized with input from the newly trained co-facilitators.

The capacity-building phase also included a two-day roll out of training with at least 60% of the staff of each facility via Health Care Workers (HCW) and PLHIV lead trainings, with support from NFPB and HP+.  Three hundred and Fifty-eight (358) healthcare staff from the KPH, WRHC and SPGH, were trained in S&D-reduction strategies.

The last element of this phase of the project was the development of tailored policy interventions for each facility coming out of recommendations from the staff trainings and other observations.

After several consultations with staff, it was recommended that information, education and communication (IEC) material be developed for the policy intervention.  An e-poster, video and printable posters were developed and presented to the three sites.

Verification was subsequently done to ensure that either the poster or video was displayed in the three facilities to facilitate entry into the final and 3rd phase of the project, which was the end line survey.

This was to determine if the capacity building initiatives (both trainings and IEC material) instituted in the facilities resulted in a change in behaviour and hopefully a reduction in stigma and discrimination of clients.

The initiative was supported by United States Agency for International Development (USAID) and The U.S. President’s Emergency Plan for AIDS Relief (PEPFAR).