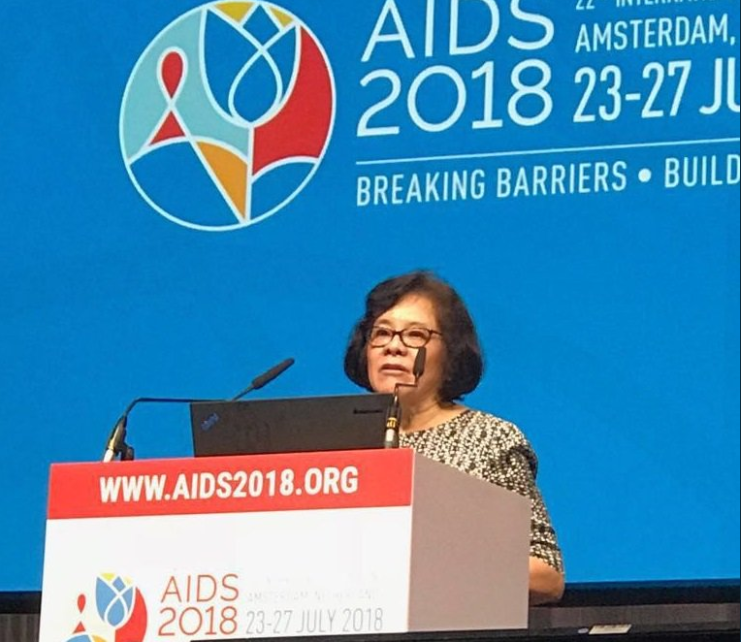 Guyana’s First Lady and PANCAP Champion, Her Excellency Mrs. Sandra Granger has become a familiar presence at the 22nd International AIDS Conference.  Earlier this week, Mrs. Granger and Belize’s First Lady Mrs. Kim Simplis-Barrow participated in a session hosted by MTV Shuga on “Finding and Reaching Men with HIV services”.  The First Lady then helmed the “Building bridges from scientific innovation to implementation” Plenary Discussion as the chair.

In her opening remarks, Mrs. Granger highlighted that the response to HIV has been ongoing for the past 30 years with advances made that allow anyone on treatment to live a normal, healthy life.  She had nothing but praise for the doctors and scientists who have dedicated their lives to working on breakthroughs in HIV treatment.  She urged that these advances must continue until there is a vaccine, which can cure HIV.

One such pioneer in advancing HIV treatment was the first speaker, Dr Brad Jones, Assistant Professor, Infectious Diseases, Cornell University, New York.  Dr Jones presented on the “New Science for a Cure” and was described by Mrs. Granger as a stalwart in the response to HIV who has dedicated a significant portion of his career to studying the immune response to HIV. 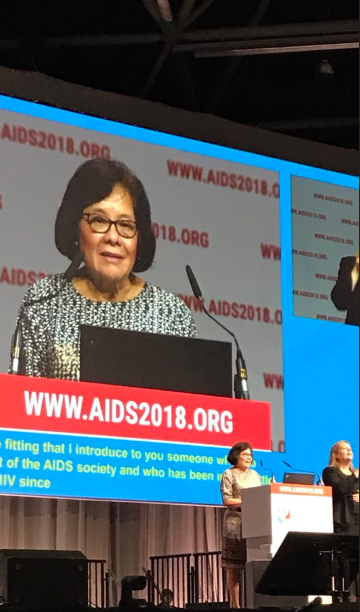 Image: First Lady of Guyana, Her Excellency Mrs. Sandra Granger as taken by an audience member at AIDS 2018

While performing her duties as chair of the discussion, the First Lady also championed one of her causes, Mother-to-Child Transmission of HIV.  She advocated for continued attention on the issue in order to maintain the gains achieved including seven Caribbean countries being certified for the elimination of “Mother-to-Child” transmission of HIV.

This aligns with the First Lady’s duties as Vice Chair of the Spouses of CARICOM Leaders Action Network (SCLAN), which recently held a dialogue between the Business Centre for International Understanding (BCIU) in New York to advance the causes championed by the organization.

The First Lady of Guyana has effectively utilized her participation at AIDS 2018 to highlight the pillars of SCLAN, which in addition to Mother-to-Child Transmission also include reducing adolescent pregnancies, violence against women and girls and cervical cancer.  These pillars fall within the priorities of the PANCAP Justice for All (JFA) Roadmap.  To view the entire discussion on “From Scientific Innovation to Implementation”, CLICK HERE.