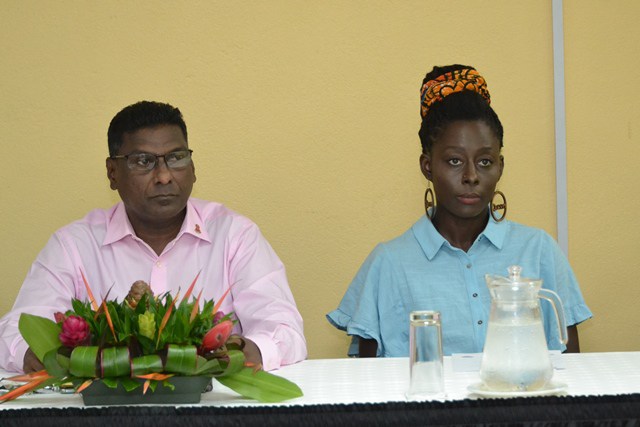 Ministry of Public Health (Guyana) and Advancing Partners and Communities Project (APC) collaborate to re-introduce HIV and AIDS ads and PSAs to sensitize Guyanese─ APC has invested approximately G$13,000,000.00 in the production and broadcast of the Ads and PSAs

In an effort to re-sensitize the Guyanese public on HIV and AIDS testing, treatment and prevention, a series of Public Service Announcements (PSAs) and advertisements were launched.

The National AIDS Programme Secretariat (NAPS) collaborated with the Advancing Partners and Communities Project (APC) to produce the content to be aired on all media platforms especially radio and television. Also, partnering in the effort was the United States Agency for International Development (USAID) and the U.S President’s Emergency Plan for AIDS Relief (PEPFAR).

The launch of these Ads and PSAs signal the commitment of the Ministry of Public Health and APC to re-sensitize the population on the ongoing campaign for the prevention and control of the spread of HIV and AIDS.

Chief Medical Officer (CMO), Dr. Shamdeo Persaud indicated that this is a part of several initiatives embarked upon by the ministry contributing to ending the Worldwide HIV/AIDS epidemic.

Noting that the Guyanese public may have been de-sensitized, Dr. Persaud said there is a need for effective implementation and distribution of the information. “It’s good that we are back on the trail because we did have a lull in the active programme of informing the public.”

Four 30 second ads, four one-minute PSAs along with audio pieces for radio have been produced, all focusing on knowing one’s status, treatment adherence and the prevention of the spread of the disease. The productions are all high quality, digital animation, information videos and audios which are likely to be aired at all public health facilities, other agencies organizations throughout the country.

Ms. Lisa Thompson, Chief of Party, APC, explained that the PSAs are high-quality digital informational videos and the goals of the PSAs are to (1) increase testing uptake, especially for partner and sexual contacts of HIV positive individuals; and (2) increase the number of persons getting on HIV treatment and remaining adherent.

She revealed that the APC project, through funding from USAID and PEPFAR will also be supporting the airing of the PSAs for the rest of the year via radio and television. The overall production and broadcast cost is approximately G$13,000,000.00

Ms. Thompson further highlighted that the videos and radio messages were developed by a task group comprising representatives from the NAPS, community-based organizations (CSOs), APC and other experts from John Snow Research and Training Institute (JSI).

She stated, “through consultations and brainstorming sessions, it was determined that each topic would be produced in three formats: a one-minute animated video, an abbreviated version of the same video cut down to 30 seconds, and a voice-only version produced for radio”.

She urged the stakeholders present to use and share the PSAs widely, “Help us to get the word out. Help us to encourage persons to know their status”, stated Ms. Thompson, “You go and get tested if you don’t know your status. When you know your status then you have information that can help you make the best decisions for yourself. Through the government and civil society, services remain available and this includes free HIV testing, treatment, and other support services”.

Mosa Teleford, the Writer and Producer for the scripts of the Ads and PSAs, said this is the first time she had prepared content for an animated production, however, the process has been rewarding given her previous years of experience in scripting for HIV and AIDS productions.

This is in alignment with Ministry of Public Health and support partners working towards fulfilling the tripartite health vision 2020 which aims to advance the well-being of all people in Guyana, reduce health inequalities, and improve management and provision of evidence-based responses to tackle health-related matters.

What is the Advancing Partners and Communities Project (APC)?

The Advancing Partners and Communities Project (APC) is an HIV focused project that is funded by the United States Agency for International Development (USAID), through the President’s Emergency Plan for AIDS Relief (PEPFAR) initiative”.

Through Community based client advocates and civil society organizations, APC supports the national HIV/AIDS program of the Government of Guyana through the national AIDS Program Secretariat (NAPS). Guyana’s national strategy Health Vision 2020 “Health for all in Guyana” A National Health Strategy for Guyana 2013 -2020” notes that “To meet the vision for 2020, the strategy targets the tri-partite goal:

i) advance the well being of all peoples in Guyana;
ii) reduce health inequities and;
iii) improve the management and provision of evidence-based, people-responsive, quality health services.