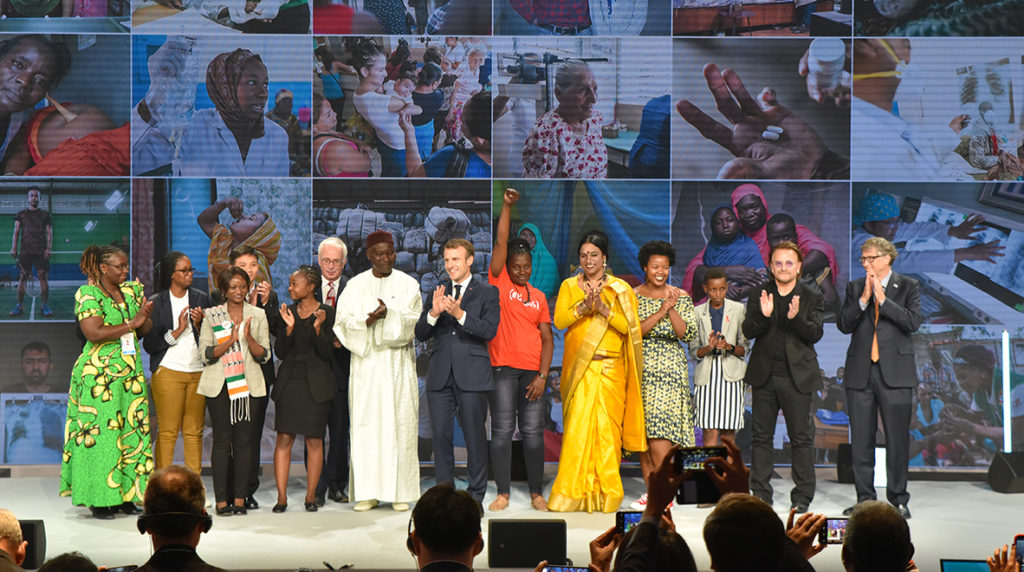 LYON, France – In an unprecedented show of global solidarity, donors at the Global Fund’s Sixth Replenishment Conference pledged US$14.02 billion for the next three years – the largest amount ever raised for a multilateral health organization, and the largest amount by the Global Fund. The funds will help save 16 million lives and end the epidemics of AIDS, Tuberculosis and Malaria by 2030.

President Emmanuel Macron of France electrified the conference with a stirring appeal to deliver the next generation a better and healthier world, fighting inequality and strengthening social justice. President Macron called on all partners to increase their commitments by at least 15% in order to reach the target of at least US$14 billion, and during the pledging session that followed, donors answered that urgent call to step up the fight – many making last-minute increases on top of their original pledges.

In a stunning final push to reach the US$14 billion target, President Macron joined Bill Gates to make increased commitments for the coming three-year period, announcing that they would each guarantee an additional US$60 million on top of pledges announced earlier in the day. With just US$80 million to go, President Macron, Mr Gates and Bono – pointing to the imperative of ending the epidemics by 2030 – pledged to secure at least a further US$100 million during the replenishment period to achieve a total of over US$14 billion.

“Everyone in the room today felt the power of a global community coming together to say in one voice: ‘We will end these epidemics’,” said Peter Sands, Executive Director of the Global Fund. “We are tremendously grateful to President Macron for his incredible leadership over the past year. With the incredible support of partners and donors around the world, we succeeded in reaching over US$14 billion to help save 16 million lives.”

Many donors significantly increased their pledges, citing the urgency to take decisive action. The United States Congress signaled outstanding support with US$1.56 billion a year, maintaining a 33% portion of all contributions. France itself increased its contribution by 20% to €1.296 billion including the additional US$60 million announced by President Macron.

Private donors pledged more than US$1 billion for the first time ever, an extraordinary achievement led by the Bill & Melinda Gates Foundation’s pledge of US$700 million, subsequently complemented by the additional pledge of US$60 million, and (RED)’s pledge of US$150 million, alongside longstanding supporters such as Sri Dato Dr Tahir, Comic Relief and Takeda. Six new private donors also joined, including Children’s Investment Fund Foundation and the Rockefeller Foundation, and 11 partners committed other resources to expand innovation and impact.

The promise to save 16 million lives in the next three years and ultimately end the epidemics by 2030 will only be achieved by leadership and increased investment in health from the countries implementing programs. An unprecedented number of implementing countries from Africa – 23 – made pledges to the Global Fund. During the conference, several heads of state committed to increase domestic resources for health and work towards universal health coverage.

In a spirit of global solidarity, the conference brought together leaders from countries all over the world, including numerous heads of state and government ministers, several Nobel Peace Prize Laureates; CEOs and leaders of private foundations; Senegalese singer and Malaria activist Youssou N’Dour; civil society leaders and people affected by the diseases.

Maurine Murenga, who was diagnosed with HIV in the early 2000s, and who serves on the Global Fund Board, thanked all partners for recognizing the need to focus investments in programs that specifically address the disproportionate effects of HIV on women and girls.

“Those of us who survived HIV are here thanks to the Global Fund, but millions are still dying unnecessarily because they cannot access these life-saving programs,” said Murenga. “Young women and girls have to be at the center of the response to HIV in Africa. It is unacceptable that young women and girls are still twice as vulnerable to HIV in sub-Saharan Africa and six times more vulnerable in the worst hit countries. We know change is possible and we have to act now.”

Addressing the conference, several heads of state and governments of African countries praised donors and partners for their global solidarity and stressed the importance of domestic financing to develop long-term sustainability of health programs.

The Global Fund partnership is a proven mechanism for maximizing impact. Health programs supported by the Global Fund have saved more than 32 million lives since its inception in 2002, and provided prevention, treatment and care services to hundreds of millions of people.

“Today’s Global Fund replenishment result is an incredible achievement,” said Bill Gates, Co-Chair of the Bill & Melinda Gates Foundation. “This is a big day in the history of AIDS, Tuberculosis and Malaria – and one that no one expected two decades ago when the diseases were at their peak. Thank you to all the donors who increased their contributions. We hope others are inspired to follow their lead and support the Global Fund to continue its life-saving work.”

In a special message delivered on behalf of the United Nations Secretary-General Antonio Guterres, Deputy Secretary-General Amina J. Mohammed explained how vital investments by the Global Fund are to meet the health-related SDGs, as well as to address poverty and inequality. The Global Fund invests US$1 billion yearly to help build resilient and sustainable systems for health, a critical component for universal health coverage.

Peter Sands declared in concluding remarks: “This year, we promised the seven-year-olds of the world that we would end AIDS, TB and Malaria by 2030 – the time they become adults – so they don’t have to. Today’s remarkable demonstration of global solidarity shows that the world is committed to keep that promise, by working stronger, faster and together. Ending AIDS, TB and Malaria is the fight that unites, and thank you to all our many partners for stepping up the fight.