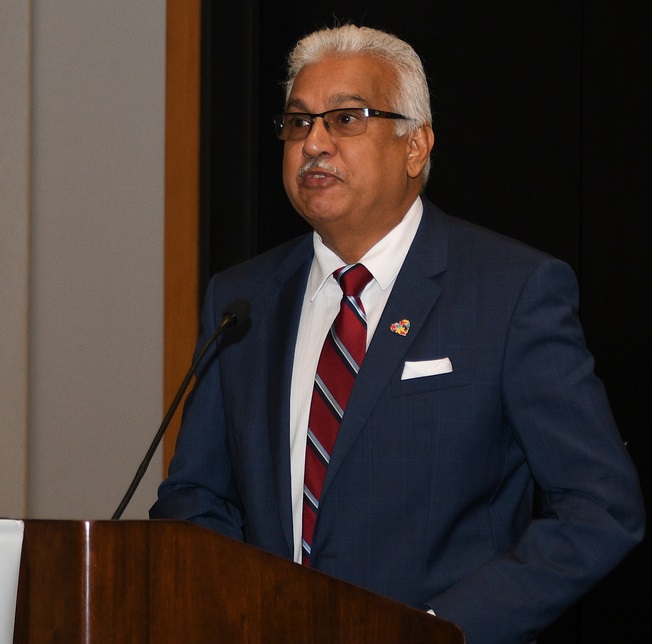 I am pleased to attend today’s proceedings as HIV and AIDS continue to be a significant, regional and global concern. For this
reason, it is important that we move in a united manner to develop strategies for sustaining HIV prevention, treatment and care services. Prevention, early detection and access to antiretroviral treatment are essential to the reduction of HIV transmission.

Governments, health service providers, international organizations, civil society organizations, people living with HIV, key populations and other stakeholders must work together in the response to HIV and AIDS.

I wish to thank the international organizations such as the Pan American Health Organization (PAHO), the PEPFAR agencies, the Centre for Disease Control and Prevention (CDC), the Health Resources & Services Administration (HRSA) and the International Training and Education Center for Health (ITECH) for the significant technical support we have received over the years in tackling HIV/AIDS.

Regional Sustainability Level of the Program

It has been more than 34 years since the first reported HIV/AIDS case in Trinidad and Tobago and the Caribbean and over 17 years since highly
active antiretroviral treatment (HAART) became a reality. HIV and AIDS remain a major health burden in the Caribbean.

The Caribbean continues to have the unenviable position of having the second highest HIV prevalence after sub-Saharan Africa.  At the end of 2016, UNAIDS estimated that there were between 280,000–350,000 persons living with HIV in the region with five countries accounting for 92%, namely: Haiti (48%) The Dominican Republic (22%), Jamaica (10%), Cuba (8%) and Trinidad and Tobago (4%).  The annual number of new infections among adults across the Caribbea remained static at an estimated 18,000 since 2010, with countries such as Trinidad and Tobago, Haiti and The Dominican
Republic all experiencing declines in new infections, while Belize, Surinam, Guyana and Cuba are reported to have registered increases in new infections over the period 2010-2016. New infections among children aged 0-14 years decreased by 44% from 1800 to less than 1000 between 2010 and 2016.

As at 2016, the HIV Testing and Treatment Cascade in the Caribbean revealed that on average:

We are meeting today at a time when the region and the rest of the world has united with a sense of urgency and tremendous optimism at ending the HIV epidemic as expressed in the Resolution adopted by the United Nations General Assembly on 8 June 2016 entitled “On the Fast-Track to Accelerate the Fight against HIV and to End the AIDS Epidemic by 2030”.

In the latter half of 2016, the Government of Trinidad and Tobago adopted WHO’s “Treat All” policy – recommending that all patients are initiated on treatment immediately following an HIV diagnosis. The Medical Research Foundation (MRF) – the largest treatment site in Trinidad and Tobago with over 8000 PLHIV registered in care (i.e. just over 73% of all PLHIV in care nationally) is a key partner in this regard.

Our vision for HIV has progressed from a horizon of mitigating the effects of HIV to the new horizon where we can foresee the halting of the
transmission of HIV by 2030. Indeed, we are meeting today as the Caribbean and the rest of the world to begin the final fight as we come to
the end of the HIV and AIDS drama.

The keys to ending HIV and AIDS as a public health threat include:

1. Prevention: with a heightened emphasis on empowering adolescent girls, young girls and key populations.2. Treatment of all persons infected,
3 Elimination of HIV-related stigma and discrimination
4. Articulating a framework with strategies to achieve stable base of resources for achieving sustainability.

From the outset of the HIV epidemic in the Caribbean, there have been varied efforts to ensure that our regional and local communities
achieved sustainability in our response to HIV.  Sustainable HIV programs are characterized by the ability of a national government and regional partners to increasingly assume full strategic and financial responsibility for its HIV and AIDS response over the long term.

It requires the development and strengthening of policies, infrastructure, skills, processes, human and financial resources to ensure the
response can survive, adapt and scale-up.  Financing is key to mounting a sustainable response. With 2020 deadline for the “90-90-90 Fast Track target” approaching, the region finds itself in a global environment with complex development priorities that pose challenges to national budgets and affect bilateral cooperation.

The region is expected to experience reduced technical and financial inflows and must collectively mobilize domestic resources especially, for the support of prevention and the elimination of HIV-related stigma and discrimination among key and vulnerable populations, as complimentary
external financing dwindles.

While the desire to achieve sustainable responses is widespread, little formal research has been undertaken to assess the resilience of
Caribbean territories, in the face of the withdrawal of external support.

As a region, we need to urgently heighten the research and the debate on the sustainability of the HIV response.

Other issues that may be discussed:

To improve the quality and availability of diagnostic and monitoring services and systems for HIV and AIDS and related sexually transmitted
and opportunistic infections, including tuberculosis, under a regional network of tiered laboratory services;

Improve the capacity of Caribbean national governments and regional organizations to increase the availability and retention of trained health care providers and managers – including public sector and civil society personnel, as well as PLHIV and other HIV-vulnerable populations –capable of delivering comprehensive, quality HIV-related services, according to national, regional, and international standards.

The region needs to bring the rate of new infections very close to zero.  The focus should be on key populations and other venerable groups such as adolescent girls and young women who represent over 4% of new HIV infections in the Caribbean. Women account for over 45% of infections among adults with varied reasons in various territories.

Ladies and gentlemen, I thank you for allowing me to address you today. I look forward to the outcomes of today’s exercise as we work towards delivery of essential services for HIV patients.  It is only through feedback mechanisms such as today’s workshop that can we achieve our goal of ridding the population of HIV/AIDS by 2030.  I urge you to keep this goal in mind and the significance of your efforts. It is only together that we can achieve a Healthy me…Healthy You…a Healthy Trinidad and Tobago, and a healthy region.