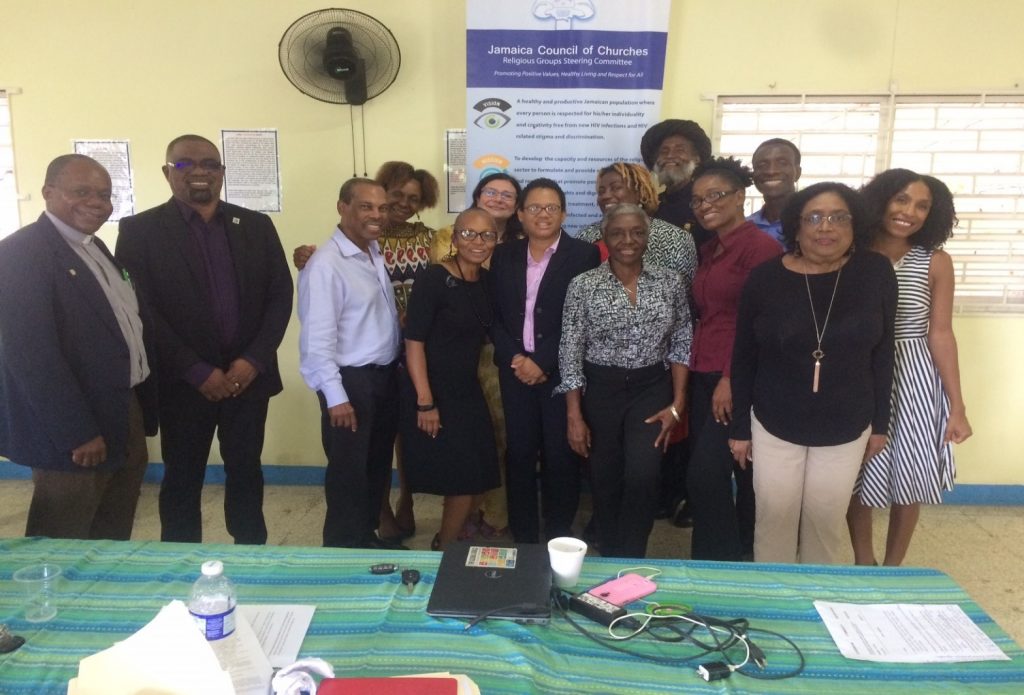 Faith leaders agreed to address HIV-related stigma and discrimination at consultation in JamaicaJamaica Council of Churches (JCC) partnering with Ministry of Health and Wellness, Jamaica for human rights advocacy

PANCAP convened a Consultation with Faith Leaders in Jamaica on 6 June 2019 at the Bahai Centre, Mountain View, Kingston.  The meeting was held in partnership with the Religious Group Steering Committee (RGSC) and representatives of religious leaders as a follow up to a consultation held in 2017.

The forum was chaired by Rev. Canon Garth Minott, Chair of the Regional Consultative Steering Committee and PANCAP Champion, who announced a new initiative of the Religious leaders in partnership with the Ministry of Health and Wellness, Jamaica. The Jamaica Council of Churches (JCC) has signed an agreement with the Ministry as a sub-sub-recipient of the Global Fund Grant for intervention in human rights advocacy with special focus on reducing stigma and discrimination within religious organizations generally and among religious leaders in particular. A mapping exercise, which is an integral part of the project will assist in identifying religious agencies offering services for healthy living which will serve to enhance the directory of services offered by the National Family Planning Board.

Rev. Canon Minott reported that the RGSC has formed valuable partnerships with the AIDS Healthcare Foundation (AHF), the Joint United Nations Programme on HIV/AIDS (UNAIDS), Ministry of Health and Wellness, the United Theological College of the West Indies (UTCWI) and the Jamaica Theological Seminary (JTS).  He further stated that there has been a meeting with five parliamentarians which resulted in an agreement to focus on providing sensitisation on issues related to sexual health and the role parliamentarians can play as leaders in society.

In his remarks, Dereck Springer, Director of PANCAP shared that significant progress has been made in responding to the HIV epidemic. However, there is still more work to be done to achieve the UNAIDS 90-90-90 Target by 2020 and to end AIDS as a public health threat by 2030. He stated that the national consultations build upon the work that is being done at the regional level and noted that it is at the country-level that the real work is done to address stigma and discrimination that impede individuals’ access to prevention, treatment, care and support services. He lauded the work that is being done by the RGSC in supporting the national response through increased partnership with the Ministry of Health and Wellness, Civil Society Organisations (CSOs), development partners and the private sector. He acknowledged the presence of two persons who are living with HIV and noted that their input is critical for shaping the faith community’s response.

Ms Karlene Temple-Anderson, Grants Manager, Ministry of Health and Wellness, commended the Religious sector’s contribution to Jamaica’s efforts to achieve the UNAIDS 90-90-90. She shared that at the end of 2017, there was an estimated 34,000 People Living with HIV (PLHIV) in Jamaica and 26,426 were diagnosed. However, only 12,908 were on treatment and 7,315 were virally suppressed.   The national prevalence of HIV is 1.8% while the prevalence in Men who have sex with men (MSM) was 29.6% and transgender people 51%.  Female sex workers were 2.0%. As at April 2019, Jamaica now purchases all its anti-retroviral drugs and laboratory reagents and consumables. She noted that partnership with the faith community was helping to fill gaps in the response and that the Faith-Based Organisations (FBOs) are involved at every level of the response including on the Country Coordinating Mechanism for the Global Fund Grants.

Ms Temple-Anderson challenged faith leaders to focus on gender norms and practices that support vulnerability of women and girls, violence against women and girls, norms of masculinity that support poor health-seeking behaviours among men; abstinence, fidelity and partner reduction; elimination of intimate partner and domestic violence, cross-generational relationships between older men and young girls and the need to remove the perception that the Faith community is a place of exclusion rather than a refuge. She also encouraged faith leaders to develop social marketing and mass media campaigns to address prevention, benefits of treatment and retention in care.

Ms Manoela Manova, UNAIDS Country Coordinator for Jamaica stated that there is a public role for FBOs in the response.  She posted that FBOs can overcome obstacles through partnerships and that they have a role to play in creating an enabling environment, increasing testing and retention on treatment and care.  She further stated that FBOs have the power to influence and therefore have a pivotal role in policy and legislative reform and in the development of the national strategic plan for HIV and AIDS.   She advocated for the inclusion of FBOs in developing strategies and policies for vulnerable groups.

Faith leaders agreed to address stigma and discrimination within the faith community, facilitate a dialogue with the community of PLHIV around the benefits of disclosure and to focus efforts on policy, partnership building and training of faith leaders.  They also reached consensus on utilizing knowledge synthesis to disseminate educational material as well as feedback on progress received from the faith community.