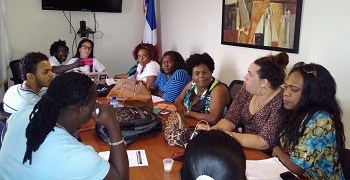 Dominican Republic: a new stimulus to the Law against discriminationActivists demand “Draft General Law of Equality and Non-Discrimination” be sent to the National Congress.

Image: The Management Committee that promotes the Law.

In the Dominican Republic, cases of discrimination against LGBTI populations and people with HIV are becoming increasingly evident, particularly in health services. In view of this situation, Dominican civil society has united to promote a Law against discrimination.

The health services centers, which serve the most vulnerable populations, are spaces where the LGBTI community faces various situations of discrimination. They are denied care or are treated poorly. In the workplace, the rights of gay men and transgender women are also violated; where the latter is the object of ridicule, a dynamic that throws them into sex work in order to survive.

Likewise, access to the justice system represents an odyssey for LGBTI groups due to the existing homophobia. The most recent case was that of Said, a gay boy who was just 13 years old when he was raped and strangled in his home. One month later, the case has been closed without finding the perpetrator.

The situation of people with HIV is not different; discrimination is present in all forms and places, from access to health to the performance of diagnostic tests as a condition to be hired or to stay in a job, an illegal practice according to Law 135-11 on HIV and AIDS.

Yudelka, a woman who was fired from her job for testing positive for HIV, told Corresponsales Clave: “I knew I had HIV, but I thought that after seven years of being in the company I would not be fired for this reason, although they did not explain to me the reason for my dismissal. Four months later, I got pregnant and the humiliation I went through during the birth was horrible, my medical history was marked and after the cesarean section I had been isolated because I could not be with the other women, which marked my life forever. “

Against this background, activists from different population groups have joined efforts to develop strategies that allow political articulation and demand that the “Draft General Law of Equality and Non-Discrimination” be sent to the National Congress. The proposal of Law was delivered to the Executive Branch two years ago and is still shelved.

As a first step, on Monday, August 20, the group sent a letter to the Executive Branch asking for information on the status of the piece of legislation; the following steps will be: implement a national informative campaign, intervene in the media, collect signatures, make sit-ins and alliances with other civil actors so that the need of this Law is of public knowledge.

Karina Crisóstomo, the current general coordinator of the advocacy plan, called on the entire country to be united for this Law.  Achieving this law would bring us closer to the 90-90-90 goals and the consolidation of a large part of the Sustainable Development Goals. It would be an inclusive law that will not leave anyone behind.

Ingrid Bretón, president of Fundación Paloma, called on Dominicans to join this struggle: “Dominican society is the one that discriminates the most for different reasons, due to social inequality, economic or health; this law is for everyone and we must all go out and defend it”, she said.

The members of the “Management Committee” that promotes the Law have called on all civil society to join this advocacy campaign for the State to take note of the need for this law and the urgency of it becoming a guarantor of the rights of Dominican citizens, especially those groups that are most vulnerable.

Rosalba Karina Crisóstomo, the current general coordinator of the advocacy plan, made the following call, “as a civil society we are promoting this draft law because the Dominican State must guarantee that we all have equal treatment.”

However, the Dominican Republic has a legal framework that makes visible the most vulnerable groups; according to the latest regional political mapping carried out by HIVOS (2016), violations of the rights of these groups are increasing due to the lack of clear rules that allow them to the full claim of their rights, while the laws are difficult to interpret in that sense.

The “Draft General Law on Equality and Non-Discrimination” was the result of the hard work of the National Group for the Elimination of All Forms of Stigma and Discrimination (GRUNEED), with the support of renowned consultants from different public ministries, members of organized civil society and international agencies such as UNDP and UNAIDS, and under the coordination of the National Council for HIV and AIDS (CONAVIHSIDA). When it was presented several years ago, the draft law was considered by the president of the republic as an important law and, in his own words, would be included in its 2016-2020 Government Plan.

It is expected that the draft law will generate some kind of controversy due to the pressures of the Catholic Church and other evangelical churches, but it is important that the debate is established and that Congress has a position on the protection of the right to equality and non-discrimination of people.

Source: The Latin America and the Caribbean Regional Platform for Support, Coordination and Communication of Civil Society and Communities (LAC Platform)