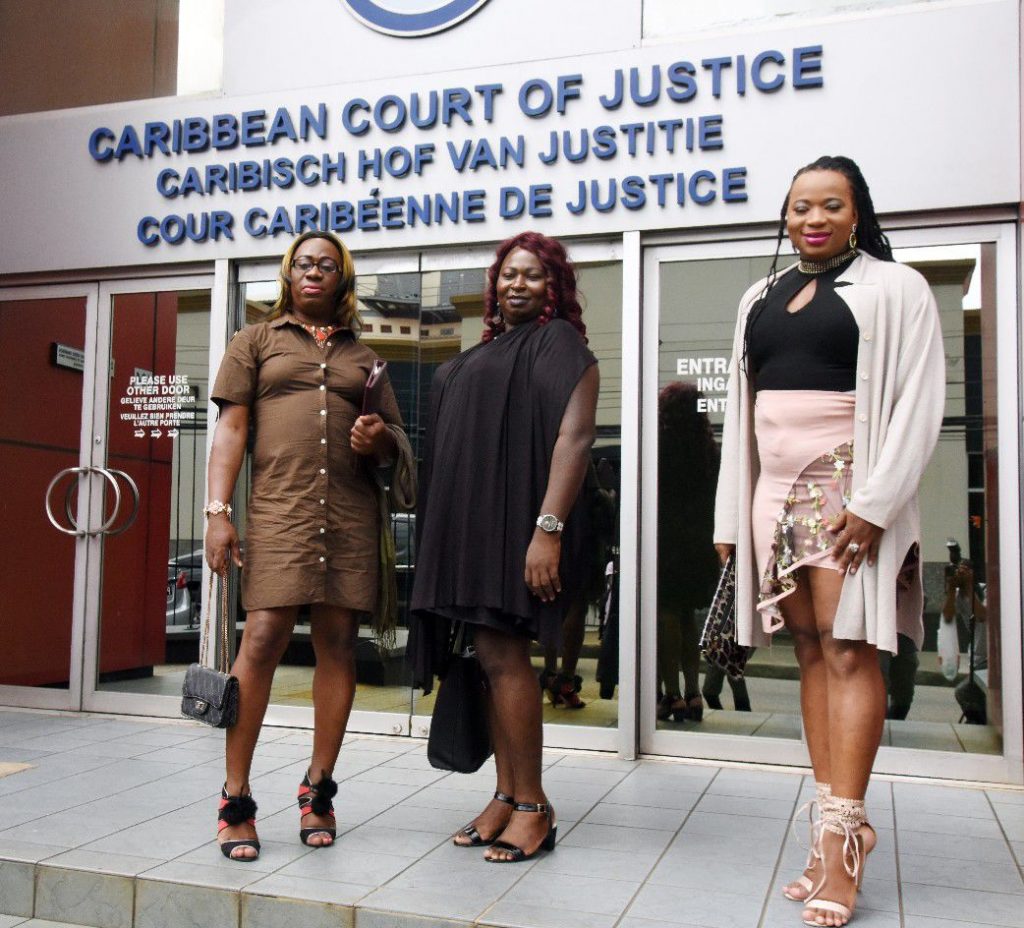 On Thursday, June 28, 2018, a five-member panel of the Caribbean Court of Justice (CCJ), chaired by Justice Adrian Saunders, President, held a hearing in the appeal by Angel (Seon) Clarke, Gulliver (Quincy) McEwan, Peaches (Joseph) Fraser and Isabella (Seyon) Persaud, at the CCJ’s headquarters in Port of Spain, Republic of Trinidad and Tobago.

Click here for the audio recording of the hearing.

In February 2009, four transgender women were convicted for the offence of being “a man” appearing in female attire in a “public place” for an “improper purpose.” This offence falls under the 1893 Summary Jurisdiction (Offences) Act section 153(1) (xlvii) and, in its application, disproportionately targets Trans women. Labeling the law “hopelessly vague,” and constitutionally invalid, the litigants argued that the offence infringes on their rights to due process, freedom of expression and non-discrimination and equality. The litigants further argued that the law is not formulated with enough precision and clarity to allow the ordinary person to regulate their conduct.

It is important to note that “man” under this summary offence has been treated by state officials as including persons whose birth certificates describe them as “male” at birth and who identify as transgender persons or Trans women. However, there is growing acceptance and respectful treatment of persons whose gender identity does not correspond with the gender marker on their birth certificate.

It is a common and respectful practice to refer to a transgender person in a manner that is consistent with the gender that matches the individual’s identity, which in this case is female.

In addition to the four litigants, over twenty representatives from civil society organizations and universities were present to observe the proceedings. Civil society organizations (CSOs) present included the Society Against Sexual Orientation Discrimination (SASOD), one of the original litigants in this case, Guyana Trans United (GTU), Guyana Rainbow Foundation (GuyBow), Promoting Empowerment Through Awareness For Les/Bi Women (PETAL) from Belize and the Alliance for Justice and Diversity (ADJ), which is a coalition of seven organisations in Trinidad and Tobago. The Faculty of Law The University of the West Indies Rights Advocacy Project (U-RAP) was also present.

Ifasina Efunyemi, an educator and representative from PETAL Belize, said, “Even though this was a case coming out of Guyana, it involves issues that are relevant to the LGBT community, and other social justice movements, throughout the region.” In a public forum held in the evening of 28 June at the City Hall in Port of Spain, hosted by Trinidad and Tobago’s AJD, on “Administrative Violence and Structural Inequality,” panellist David Abdulah, leader of the Movement for Social Justice, commented on the intersections of social justice claims.

The well-known labour rights leader said that “You cannot be fighting for workers’ rights and then discriminate between one worker and another.” Highlighting the need to recognize difference and diversity, the Very Reverend Shelley-Ann Tenia, Dean of the Holy Trinity Cathedral, also a panellist at the evening forum said, “There is space for us, even if we are different.”

One of the major hurdles for the appellants in their challenge to the 125-year-old law was the existence of a savings law clause in the Constitution that made it harder to use the Guyana Constitution to question laws in force before the 1980 Constitution. However, the ground-breaking decision of the CCJ on Wednesday 27 June, in the case of Nervais and Severin vs. AG of Barbados, provides an interpretation of savings law clauses that significantly limits their negative impact in cases challenging colonial laws. The CCJ declared that the mandatory death penalty in Barbados was unconstitutional and that the general savings law clause was not a barrier to that declaration.

Substantively, both sides appeared to agree that dress consistent with one’s gender identity, even if that identity is different from the gender assigned at birth, was wholly legal.

At AJD’s public forum of 28 June, panellist and Managing Director of the Lloyd Best Institute of the West Indies, Sunity Maharaj, said that, “To one degree or another, people of the Caribbean have been living lives of improper purpose,” making reference to histories of resistance and struggle in response to colonial oppression.

Much of the discussion earlier that day between the CCJ judges and the attorneys focused on whether the term “improper purpose” was sufficiently certain to allow persons to know what was being prohibited. In his comments and questions, Justice Wit emphasized that the test must be based not on legal experts as the standard, but ordinary citizens and charges should stem from crimes and not one’s manner of dress.

Mendes SC strenuously argued that those applying the law specifically targeted the appellants as Trans women. The State suggested that any arbitrary and discriminatory enforcement of this law could be addressed through appeals and applications for judicial review. During the hearing, President Saunders commented that transgender persons who are not of great means or social influence might lack meaningful access to these procedures and thereby be at risk if the law is not sufficiently certain. Justice Wit gave the example of a rich person and a poor person, both of whom in principle could reserve a room at the Waldorf Astoria Hotel, but of course, in real terms, this hotel was entirely out-of-reach to the poor person because of lack of means.

It is important to recognize the experiences and efforts of the four transgender women leading this litigation over the past eight years.

Being a part of an extremely marginalized community, they have faced significant barriers to legal representation and accessing justice due to various contributing factors such as poverty and discrimination. While they were successful in accessing partnerships and resources to help further their challenge of the law, the larger community of Transgender persons still face many of these barriers. This litigation is an important step towards a more progressive and accepting society but we should remain cognizant of the everyday realities of those who are still marginalized due to their identities.

The CCJ has reserved judgment in this appeal. If the CCJ finds for the appellants, it can declare that the summary offence in section 153(1) (xlii) is inconsistent with the Constitution and therefore null and void. Alternatively, the CCJ may seek to modify the offence to bring it in conformity with the Guyana Constitution. The written decision in the McEwan appeal could be delivered during the remainder of 2018 or the first half of 2019, based on CCJ’s practice in other cases.