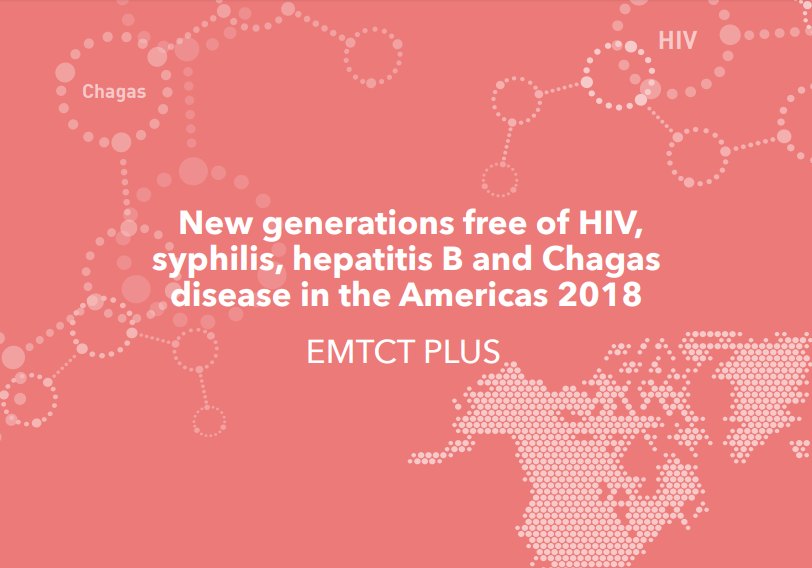 Countries move towards the elimination of mother-to-child transmission of HIV, Syphilis, Hepatitis B and Chagas diseaseSince 2010, 30,800 children were born HIV-free in Latin America and the Caribbean. However, cases of congenital syphilis are increasing.

Washington, DC, May 2019 (PAHO) – Countries are moving towards the elimination of mother-to-child transmission of HIV, syphilis, hepatitis B and Chagas, but progress has been uneven, according to a new report from the Pan American Health Organization (PAHO).

The report “New generations free of HIV, syphilis, hepatitis B and Chagas disease in the Americas 2018”, which compiles data from 52 countries and territories in the Americas, shows that since 2010, 30,800 children were born without HIV thanks to interventions to prevent mother-to-child transmission.

“Significant progress has been made towards ensuring a generation free from AIDS and syphilis, and now efforts are also being made to stop children from being born with hepatitis B and Chagas,” said PAHO Director, Carissa F. Etienne. “We must intensify and integrate the response and expand access to health services if we want to end transmission of these four diseases,” she added.

In 2017, 20 countries and territories of the Americas reported data indicating the elimination of mother-to-child transmission of HIV, seven of which received validation from WHO. However, it is estimated that each year, 3500 children are either born with HIV or contract HIV from their mothers in Latin America and the Caribbean.

In the Region, 73% of pregnant women underwent at least one HIV test, 73% of those that tested positive went on to access treatment. This is an increase from 2010 but still lower than the 95% testing and treatment goal.

Increase in cases of congenital syphilis

According to the new report, in 2017, 15 countries also reported data indicating the elimination of congenital syphilis, seven of which received validation from WHO. However, the report also shows that cases of congenital syphilis are on the rise. In 2017, 37 countries reported more than 28,800 cases, 22% more than in 2016, although 85% of reported cases are concentrated in just one country in the Region.

The report also shows other unequal results. While the screening of pregnant women for syphilis has decreased, the treatment of those who have had the test and are found to be positive has increased.

Vaccination, key to preventing hepatitis B

The countries of the Americas have vaccinated against hepatitis B for more than 20 years. This has enabled the Region to achieve the goal of eliminating mother-to-child transmission of this disease (estimated regional prevalence of hepatitis B in children aged 5 years of 0.1%). Individually, it is estimated that several countries have also achieved this goal.

However, it is estimated that 6000 children contract the hepatitis B virus each year in the Region. In order to prevent this, PAHO recommends giving four doses of the vaccine to all children under the age of 1, the first one during the first 24 hours of life, which is a key time for preventing transmission.

In 2017, vaccination coverage with the third dose for children under the age of 1 was 87% and 25 countries and territories introduced the vaccine dose during the first 24 hours after birth to all newborns. This latter coverage increased from 61% in 2010 to 76% in 2017. Efforts are needed to continue increasing hepatitis B vaccination coverage in children.

Vertical transmission of Chagas accounts for 20% of new cases

It is estimated that each year, around 9000 babies are born with Chagas disease in Latin America and the Caribbean, accounting for more than 20% of all new cases in the Region. However, in 2017 countries notified PAHO of just 280 new cases, which highlights the urgent need to improve detection and notification systems.

The screening of Chagas disease in pregnant women also varies significantly, from 7% to 55% in the few countries that report data. The PAHO elimination initiative establishes the goal of testing at least 90% of pregnant women and newborns of HIV-positive mothers.

“Eliminating mother-to-child transmission of these four diseases presents a huge challenge”, said Dr Marcos Espinal, Director of the Department of Communicable Diseases and Environmental Determinants of Health at PAHO. “However, implementing an integrated approach in addressing this issue is an opportunity to ensure that advances towards elimination are equitable,” he added.

The new PAHO report is the first to address the four diseases together, following the 2014 renewal of a commitment made in 2010 by Ministers of Health in the Region, to eliminate mother-to-child transmission of HIV and syphilis, which was then expanded to include the other two diseases.

In order to support its Member States in achieving this, in 2017, PAHO launched the Framework for the Elimination of Mother-to-child Transmission of HIV, Syphilis, Hepatitis and Chagas Disease (ETMI-PLUS). This is a roadmap outlining strategies and interventions aimed at women before and during pregnancy, as well as for postpartum women and their newborns, in a Region with 15 million pregnant women per year and a high rate of prenatal care, but where inequalities in access to health persist, and lost opportunities remain, between and within countries.

Report – New generations free of HIV, syphilis, hepatitis B and Chagas disease in the Americas 2018